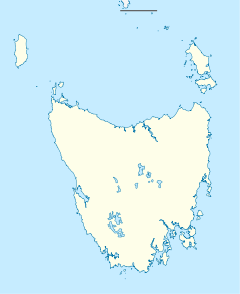 Mount Pelion West is a mountain located in the Central Highlands of Tasmania and in the Cradle Mountain-Lake St Clair National Park It is located at the eastern most boundary of the Murchison River, Tasmania river catchment.

It is the third highest mountain in the island state It has an altitude of 1,560 metres and is one of only eight mountains in the state which are over 1,500 metres.[2]

The mountain summit is at grid reference 152682 UTM Zone 55S and high resolution topographical information is available on Tasmap Achilles (4036) 1:25000. To the west lies an extensive, relatively flat moorland, to the north is Cradle Mountain and Barn Bluff, to the northeast and quite close at six kilometres is Mount Oakleigh, to the east is Mount Pelion East and due south is Mount Achilles. Below the northern side of the mountain is Pelion Creek which flows into the head waters of the Forth River. The Forth River has its origin directly east of Pelion West at Frog Flats (720m altitude), the lowest point on the whole Overland Track. At its closest point the Overland Track passes within two kilometres of the mountain summit.

An early bushwalking and mountain climbing pioneer Keith Ernest Lancaster (5 Dec 1910 - 8 Apr 2003) climbed Mount Pelion West on Wednesday 30 January 1946 by enduring a slow and painful crawl through sections of the sharp and prickly richea scoparia that frequently inhabits alpine areas around Tasmanian mountains. Lancaster referred to Mount Pelion West as one of "The Giants of the Reserve". In his account of his climb Lancaster mentions "the confusion of the enormous boulders" on the top of the mountain.

On the Achilles Tasmap is marked the approximate location of a walking track to climb the mountain along its northeastern spur. The unmarked track start is approximately 250 metres east of the Pelion creek crossing on the Overland Track and is in between two logs that are perpendicular to the Overland Track. This mountain is much more difficult to climb than either Mount Ossa or Mount Pelion East, the more traditional side-excursion climbs along the famous 65 km Overland Track [3]. This is due to a difficult traverse of over 500 metres across huge dolerite boulders to reach the obelisk shaped, sloping summit boulder.