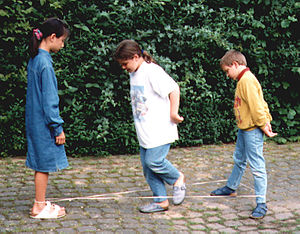 The game is typically played by three players (although more can participate) with a rope (or, more frequently, a string of rubber bands) of about 5–6 feet in length that has been tied into a circle. Two of the participants (holders) face each other about 3 feet apart, with their feet together, and position the rope around their ankles so that it is taut. The third player (the jumper) then stands between the two sides of the rope and must accomplish a specific series of moves without making an error or pausing.

The game begins with choosing the jump pattern to follow and with the holders holding the rubberband around their ankles. There are many jump patterns and most are accompanied by a song. This is sometimes called the "first level". The jumper tries to complete the chosen pattern. If the moves are completed successfully, then the rope is moved farther up and the series is repeated. When the rope gets too high for a normal person to jump over it, the player then kneels and uses his or her hands instead. Some people just stop the game at this point, as the game is much easier when using hands. If the jumper makes a mistake, players rotate their positions and the next player becomes the jumper. Once the player is finished, that person switches with one of the other people, and so on much, until everyone has been able to play.

The moves involve jumping and repositioning the feet in some manner. Some of the more common moves are jumping so that both feet land outside the rope, both are inside the rope, one is inside and one is outside, or both are on top of the rope. These moves are called "out", "in", "side", and "on" respectively, which the two other participants chant as the player executes them. Some other, less common, moves involve manipulating the rope. One of these moves, called "scissors", is executed by starting with both feet outside the rope and then crossing the legs, with the ropes in tow, so that a formation resembling a pair of scissors is formed.

There are many variations of the game that are played. Sometimes the rope is criss-crossed so that it makes an X, and the player must move his or her feet into different sections of the X in some pattern. Instead of simply raising the rope, some players create a procession of "levels", similar to a video game, that the player must complete before winning the game. When a player returns to jumping, they continue the game from the last uncompleted level. The player that first completes the levels (usually five to nine, up to neck height) wins the game. These levels often have specific names, such as the "roller coaster," which is a criss-crossed rope that is higher at one end than the other.

Chinese Jump Rope is a universal game. It has been popular for many years, certainly since the 1960s, in the United States. German speaking children call Chinese Jump Rope Gummitwist, and it is popular among young girls in Germany, Austria, Italy, Turkey and countries of ex-Yugoslavia. In New Zealand and Great Britain children refer to the game as "Elastics". It is also known as skip-tape. Estonians call this game "kummikeks", the meaning of which is most similar to skip-tape.