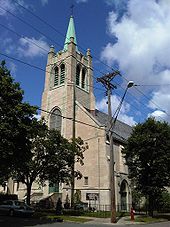 Mindekirken Outside view from the SE. 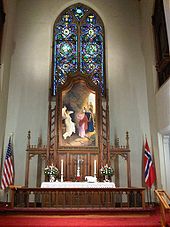 The Norwegian Lutheran Memorial Church of Minneapolis (Norwegian Den Norske Lutherske Mindekirke), better known as Mindekirken, is a Lutheran church in Minneapolis in the U.S. state of Minnesota. It is one of two American churches still using Norwegian as a primary liturgical language, the other being Minnekirken in Chicago, Illinois.[1] King Harald V of Norway is the church's patron.[2]

The Norse-American Centennial Celebration that was held in Saint Paul, Minnesota, in 1925 to commemorate the 1825 arrival of the Norwegian immigrant ship Restaurationen helped provide the impetus for a "memorial" church to be built to house the new congregation. Mindekirken was finally dedicated on May 4, 1930.

The church has been visited by members of the Norwegian Royal Family on several occasions, including King Olav V of Norway's visit on November 4, 1975. (King Olav was the father of the current King, HM Harald V of Norway.)

Mindekirken's mission statement reads: "To serve as a spiritual center for the Scandinavian American Community, worshiping in both Norwegian and English. To be a warm and inviting place for visitors and members alike, where people join in fellowship across different ages and cultural backgrounds. To encourage activities such as Leiv Eriksson International Festival, Syttende Mai Celebration, concerts, festive dinners and language classes."