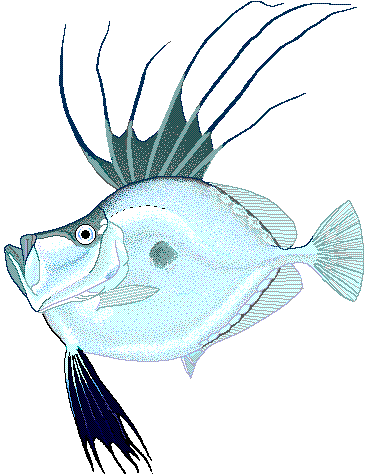 There are several other families with members sharing the "dory", some of which&mdash;i.e., those of genera "", "", and ""&mdash;were once treated within the Zeidae. The first two genera are now found within the (or Zeniontidae), and the last genus has been given its own family, .

All dories share the same roughly discoid, laterally-compressed body plan. The head is large and sloping to concave in profile; the oblique mouth is also large and in "" species, it is noticeably upturned. The s are massive and highly extensile. The large eyes are situated high on the head and are directed dorsolaterally. There is a perceptible hump in the back beginning just behind the eye; it is topped by a conspicuous, crest-shaped spinous containing 7&ndash;10 spines which descend in height towards the posterior. In adults of some species, the dorsal spines are adorned with long, streamer-like filaments. A second, much lower dorsal fin (with 22&ndash;37 soft rays) extends down the rest of the back, in a slight retrorse direction due to the body's curvature. The caudal peducle is thin and the is small and truncate (brush-shaped).

The s are thoracic, spineless, and greatly elongated; the rays are free of their membranes distally. The s are small, short, and rounded, inserted fairly low on the body and posterior to the pelvics. The contains 1&ndash;4 spines anteriorly and 20&ndash;39 soft rays with their height, direction, origin, and terminus mirroring those of the soft dorsal fin. Along the belly are a series of spinous s&mdash;scales modified into hard, bony plates&mdash;forming an armoured ventral keel. Similar scutes also cover the base of the dorsal and anal fins. The s are free of any spines or serrations. The e number 29&ndash;34, and adults possess degenerate s.

The body is apparently naked; if present, the scales are microscopic. Coloration in life is typically a highly lustrous silver, with younger dories covered in a number of randomly-placed dark, dusky spots. These spots tend to fade with age; the largest (and oldest) specimens have only one dark spot, located roughly central on the flanks. In the ("Zeus capensis") this spot is located just below the junction of the spinuos and soft dorsal fins; in the John dory the spot is central and surrounded by a yellow ring, with the body also covered in cloud-like splotches of muddy sepia. "Zeus capensis" and "Z. faber" are tied as the largest dory species at a maximum 90 centimetres total length, with the other three species only slightly smaller.

As benthic fish, dories are typically found close to or directly over the sea bottom, but occasionally in midwater as well. Depths frequented are moderate, from ca. 50&ndash;800 metres; muddy substrates are preferred, usually over the and slope, near the coast. Some, such as the ("Zenopsis conchifera"), form small and loose schools; while others, such as the John dory, are generally solitary when not spawning. Dories are poor swimmers; they propel themselves primarily via a (i.e., like the s) mode of locomotion, with the dorsal and anal fins undulating in unison as the main propulsive force and the pectoral fins used for stabilisation and turning.

The of the Zeidae are not well studied as a whole; all are assumed to be non-guarding, substrate scatterers; that is, a large number of tiny eggs and sperm are released "en mass" and scattered over a wide area. The fertilized eggs are negatively buoyant and sink into the substrate, to which they adhere. Spawning activity appears to peak in the summer months in the John dory, and in the winter months in the ("Zenopsis nebulosa"). In the latter species is reported to be internal (within the ), whereas in the former species it is external. Growth is rapid and is reached by 3&ndash;4 years.

Predators of dories include large s such as the ("Carcharhinus obscurus") and other s, and larger shelf- and slope-dwelling , such as s.