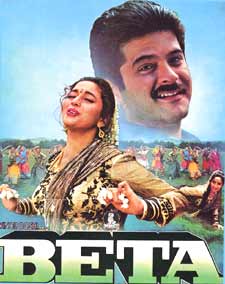 "Beta" (: बेटा, : بیٹا, : "Son") is a 1992 movie directed by . The film featured the pairing of with , who were previously paired in "" and "". The film is perhaps best remembered for the hit song "Dhak Dhak Karne Laga", which earned Dixit her nickname as the "Dhak-Dhak Girl" ("dhak-dhak" = heartbeat). "Beta" won four including Best Actress (Dixit), Best Actor (Kapoor), Best Playback Singer ( for "Dhak Dhak Karne Laga") and Best Supporting Actress . It's a remake of Tamil blockbuster "Enga Chinna Raasa" directed by Bhagyaraj. Actually the Tamil movie "Enga Chinna Raasa" was remade from the 1969 Kannada movie "Mallammana Pavada" directed by the Great Puttana Kanagal. Padmasree B.Sarojadevi and Kannada Film Legend Dr. Rajkumar were the actors in the original Kannada movie.

The song "Dhak Dhak Karne Laga" was actually recycled from "Abbanee Tiyyani" composed by from Telugu blockbuster , which was dubbed and released in hindi as "Aadmi Aur Apsara".

Beta is the story of Raju (), the only child of a widowed multi millionaire. Raju's father can provide him anything he wants but Raju's only desire is to get mother's love, in order to please Raju, his father gets married to Nagmani (), thinking that she will take care of Raju more than his real mother would. Raju becomes completely devoted to his stepmother, doing whatever she wishes. Time passes by, Raju grows up and gets married to Saraswati (). Saraswati discovers that Nagmani's motherly love for Raju is fake and all what Nagmani is interested in, is capturing Raju's wealth. And thus begins a battle within the household between daughter-inlaw and mother-in-law.