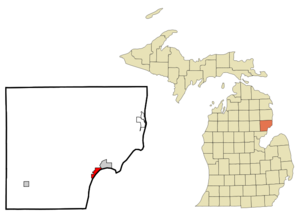 Tawas City is a city in the of . As of the 2000 census, the city population was 2,005. It is the of Iosco CountyGR|6. The city is adjacent to Tawas Township but is administratively autonomous.

*, which would be an approach to the city from the south. It has been designated the Sunrise Side Coastal Highway, and runs along (or parallels) the Lake Huron shore.
*. [ [http://www.state-ends.com/michigan/m55/ Picture of M-55 end point.] ]

There were 760 households out of which 26.6% had children under the age of 18 living with them, 49.2% were married couples living together, 10.7% had a female householder with no husband present, and 36.3% were non-families. 32.2% of all households were made up of individuals and 17.5% had someone living alone who was 65 years of age or older. The average household size was 2.29 and the average family size was 2.87.

The City is on Tawas Bay, , and is nearby, which is considered to be an especially good locale for birding. It is said to be the most important "migrant trap" in the area. A fairly complete list of migratory birds that frequent the area is available. [ [http://www-personal.umich.edu/~bbowman/birds/michigan/tawas_pt.html Birding at Tawas Point.] ] The is located there. [ [http://www.buoy2.com/lighthouse.htm Tawas Point light house history] ]

is a local public school district. Emanuel Lutheran School is a private parochial elementary school in Tawas City, serving approximately 70 students in grades K-8. It is affiliated with the .

*The "Iosco County News-Herald" is the newspaper of record for Iosco County. [ [http://www.iosconews.com/about_us/ Iosco County News Herald home page] ]
*The "Oscoda Press" is a weekly newspaper serving northern and southern [ [http://www.oscodapress.com/about_us/ Oscoda Press home page] ]
* [http://www.thealpenanews.com "The Alpena News"] is the daily newspaper of record for much of northeastern of Michigan.
*Daily editions of the "" and "" are also available throughout the area, as well as the "" and "".