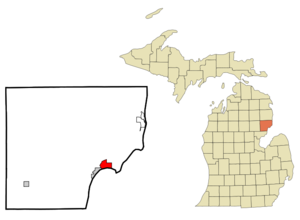 * It has been designated the Sunrise Side Coastal Highway, and runs along (or parallels) the Lake Huron shore.
*. [ [http://www.state-ends.com/michigan/m55/ Picture of M-55 end point.] ]

There were 1,382 households out of which 23.7% had children under the age of 18 living with them, 47.1% were married couples living together, 9.1% had a female householder with no husband present, and 41.0% were non-families. 37.7% of all households were made up of individuals and 23.0% had someone living alone who was 65 years of age or older. The average household size was 2.14 and the average family size was 2.79.

Although it is a small city, it has a very lively downtown area. The main downtown area would probably be considered the six-block area between Sawyer, Lincoln, Bay, and Main Street. Downtown East Tawas is home to many small shops. Many of these shops can be found on Newman Street, including Mooney's Ben Franklin, the Book Nook, Tawas Bay Fudge Company, Miller Shoes, O'Connor's, Village Chocolatier, Marmar Gourmet, Windjammer's, etc. Every shop has a small town feel and sells unique items. Many restaurants can be found here as well. A major attraction in downtown would be the Newman Street mini mall. Downtown is also home to the only movie theatre in the small town of East Tawas.

The City is on Tawas Bay, , and is nearby, which is considered to be an especially good locale for birding. It is said to be the most important "migrant trap" in the area. A fairly complete list of migratory birds that frequent the area is available. [ [http://www-personal.umich.edu/~bbowman/birds/michigan/tawas_pt.html Birding at Tawas Point.] ] The is located there. [ [http://www.buoy2.com/lighthouse.htm Tawas Point light house history] ]

is a local public school district. Holy Family School is a private parochial elementary school in East Tawas serving approximately 107 students in grades K-7. It is affiliated with the Diocese of Gaylord of the , and is a member of the National Catholic Educational Association.