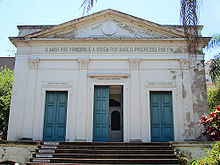 Religion of Humanity (fr. Religion de l'Humanité) was a secular religion created by Auguste Comte, the founder of positivist philosophy. Adherents of this religion have built chapels of Humanity in France and Brazil.[1]

Comte developed the religion of humanity for positivist societies in order to fulfill the cohesive function once held by traditional worship. The religion was developed after Comte's passionate platonic relationship with Clotilde de Vaux, whom he idealised after her death. He became convinced that feminine values embodied the triumph of sentiment and morality. In a future science-based Positivist society there should also be a religion that would have power by virtue of moral force alone.[2] In 1849, he proposed a calendar reform called the 'positivist calendar', in which months were named after history's greatest leaders, thinkers and artists, arranged progressively in chronological order. Each day was dedicated to a thinker, in the manner of Catholic saint's days.

According to Tony Davies, Comte's secular and positive religion was "a complete system of belief and ritual, with liturgy and sacraments, priesthood and pontiff, all organized around the public veneration of Humanity", referred to as the Nouveau Grand-Être Suprême (New Supreme Great Being). "This was later to be supplemented in a positivist trinity by the Grand Fétish (the Earth) and the Grand Milieu (Cosmic Space)".[3]

In Système de politique positive (1851–1854) Comte stated that the pillars of the religion are:

The Religion of humanity was described by Thomas Huxley as "Catholicism minus Christianity".[2] In addition to a holy trinity of Humanity, the Earth and Destiny, it had a priesthood. Priests were required to be married, because of the ennobling influence of womanhood. They would conduct services, including Positivist prayer, which was "a solemn out-pouring, whether in private or in public, of men's nobler feelings, inspiring them with larger and more comprehensive thoughts." The purpose of the religion was to increase altruism, so that believers acted always in the best interests of humanity as a whole. The priests would be international ambasadors of altruism, teaching, arbitrating in industrial and political disputes, and directing public opinion. They should be scholars, physicians, poets and artists. Indeed all the arts, including dancing and singing should be practiced by them, like bards in ancient societies.

This required long training. They began training from the age of twenty-eight, studying in positivist schools. From thirty-five to forty-two a priest served in an apprentice position as teacher and ritualist. Only at the age of forty-two could he become a full priest. They earned no money and could not hold offices outside the priesthood. In this way their influence was purely spiritual and moral. The High Priest of Humanity was to live in Paris, which would replace Rome as the centre of religion.[2]

Davies argues that Comte's austere and "slightly dispiriting" philosophy of humanity - viewed as alone in an indifferent universe (which can only be explained by "positive" science) and with nowhere to turn but to each other - "was even more influential in Victorian England than the theories of Charles Darwin or Karl Marx".[3]

The system was ultimately unsuccessful but, along with Darwin's On the Origin of Species, it influenced the proliferation of various Secular Humanist organizations in the 19th century, especially through the work of secularists such as George Holyoake and Richard Congreve. Although Comte's English followers, including George Eliot and Harriet Martineau, for the most part rejected the full gloomy panoply of his system, they liked the idea of a religion of humanity and his injunction to "vivre pour altrui" ("live for others", from which comes the word "altruism").

Religion of Humanity in Brazil

Comtean Positivism was relatively popular in Brazil. In 1881 Miguel Lemos and Raimundo Teixeira Mendes organized the "Positivist Church of Brazil." In 1897 the "Temple of Humanity" was created.[4] The services at the Temple could go on for up to four hours and that, combined with a certain moral strictness, led to some decline during the Republican period.[5] Nevertheless it had appeal with the military class as Benjamin Constant joined the group before breaking with it because he deemed Mendes and Lemos as too fanatical. Cândido Rondon's conversion proved more solid as he remained an orthodox Positivist, and member of the faith, long after the church's importance waned.[6] Although declined the church survives in present day Brazil.

There are more examples of Religion of Humanity started by positivists, and there are several authors who have given the epithet to the religion they support, whatever the religion. In India Baba Faqir Chand established Manavta Mandir (Temple of Humanity) to spread his religion of humanity with scientific attitude as explained by David C. Lane in a book 'The Unknowing Sage'. Comte influenced the thought of Victorian secularists George Holyoake (coiner of the term "secularism") and Richard Congreve.