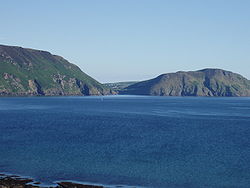 The Dalby area is popular for its view of Niarbyl Bay

Dalby is a small hamlet on the Isle of Man, located near the western coast. It lies on the A27 Port Erin to Peel road, five miles south of Peel.

The hamlet looks out towards the Irish Sea from the western side of Dalby Mountain. The Raad ny Foillan long distance coastal footpath runs through Dalby.

Prior to its closure in 2007[1], the hamlet had a public house called the Ballacallin Hotel which was known for its views of the sunset over Niarbyl. Niarbyl is home to a cafe and visitor center, as well as some traditional Manx cottages. It can be accessed by car, with parking available at the cafe.

During World War II, a radar station was based at Dalby. The station consisted of a number of bunkers, still visible in the fields between Dalby and Niarbyl and now part of local farm land.[2]

Also home to the millennium baby in 1979.

St James church is a Church of England church in the Diocese of Sodor and Man. The church was one of several commissioned by the Bishop of Sodor and Man, Bishop Ward and was consecrated in 1839. It incorporates classrooms which are now used as the church hall.[3]