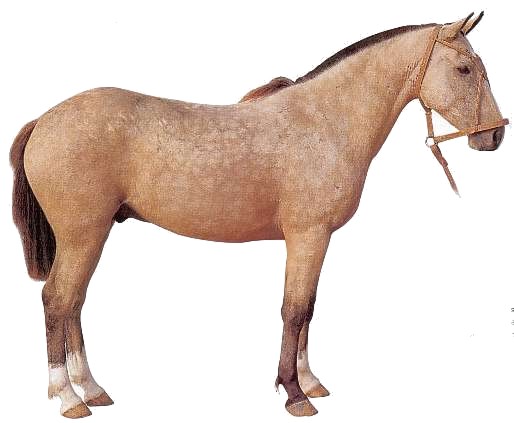 The Criollo (in Spanish), or Crioulo (in Portuguese), is the native horse of (1918), (1923), (1932) and . It may have the best endurance of any horse breed in the world next to the Arabian. In fact, due to the crioulo's low , it may be a better long-distance horse than the Arabian in prolonged races over a week in duration with no supplemental feed. The breed is most popular in its home country, and is known for its hardiness and stamina.

The word "criollo" originally referred to human and animals of purebred Spanish ancestry that were born in the , or, in Portuguese "crioulo", to animals or slaves born in the Americas. With time, the significance of the word would simply come to mean native breeds of the Americas.

The criollo is a hardy horse with a brawny and strong body. They have short, strong legs with good bone, resistant joints, low-set hocks, and sound, hard feet. The long-muzzled head is medium- to large-sized and has a straight or slightly convex profile with wide-set eyes. The croup is sloping and the haunches well-muscled, the back short with a strong loin. They have sloping, strong shoulders with muscular necks. The body is deep with a broad chest and well-sprung ribs.

The criollo is tractable, intelligent, willing, and sensible. Criollo horses average 1.45 m (14.1 hands) high. The maximum height for stallions and geldings is 1.50 m (14.3 hh) high and the minimum height is 1.38 m (13.2 hh). The maximum and minimum heights for mares are 2 cm less (approximately one inch). The line-backed dun is the most popular color, but the breed may also come in bay, brown, black, chestnut, grulla, buckskin, palomino, blue or strawberry roan, gray and overo colors.

The breed is famous for their endurance capabilities and ability to live in harsh conditions, as their homeland has both extreme heat and cold weather. They are frugal eaters, thriving on little grass. They have good resistance to disease and are long-lived.

The breed dates back to a 1535 shipment of 100 Pure Bred Spaniards - Andalusian stallions coming from , , to the imported by founder, .

In 1540, Indian hostility forced the Spaniards to abandon and between 12-45 surviving horses were set loose. When Buenos Aires was resettled in 1580 it is estimated that the feral horse population numbered around 12,000. Since it largely reproduced in the wild the criollo developed into an extremely hardy horse that was able to survive the extreme heat and cold, subsist with little water, and live off the dry grasses of the area. Settlers later came and started capturing horses for riding and for use as pack animals. The Native Americans had already been doing that many years before.

Throughout the 19th century a large proportion of the horses were crossed with imported European Thoroughbred, coach and draft horse stallions and a larger, coarser, long striding multi-purpose cart and saddle horse resulted. However, the crossbreeding nearly ruined the native Spanish horse type. In 1918, the Argentine breeders decided to create a purebred criollos registry. The breeder's association was formed in 1923. Much infighting occurred between the bands of Emilio Solanet and Enrique Crotto as the first promoted the Asian type crioulo and the latter the taller African type with a coarse convex head, fallen croup and thinner mane and tail.

It was not until 1934 that Dr. Solanet was able to firmly take control of the breeders association and set a new goal for the breed as a shorter more compact stock horse which emulated the breed he so much admired. In 1938, 70% of the registered crioulos were culled because they did not possess the phenotype aspired by Dr. Solanet and his followers. The new breed standard which he had written in 1928 was finally made available to the public now that he was assured the breeders were more united in their breed objectives. It would not be until 1957 that the registry was closed for Argentine native breeds but the registry has remained open for the breed that has been so influential in giving shape to the crioulo as a better stock horse. Nevertheless, the breed maintains its own identity in a taller, leggier and squarer body conformation with a more angular hock that gives it the long stride it requires to cover the great distances in the flat Argentine plains (known as "pampas"). The modern crioulo head prefers with a straight facial profile and a shorter muzzle and longer ears than is typical in the breed.

The breeders implemented rigorous endurance tests to help evaluate horses for breeding. In these events known as "La Marcha" the horses ride over a 750 km (466 mi) course to be completed in a 75-hour split in 14 days. No supplemental feed is allowed: the horses may only eat the grass at the side of the road. At the end of the day, a veterinarian checks the horses. The horses are required to carry heavy loads of 245 lb (110 kg) on their backs.

Today, the horse is used mainly as a working cow horse, but is also a pleasure and trail horse and has contributed a great deal to the Argentine pony (criollo/ crosses make excellent polo ponies). They are also excellent rodeo and endurance horses. The national rodeo competition is known as and it involves a paired team of horses and riders that approach a steer from both sides at a full run. The steer is sandwiched in between the two horses that lean into the bovine, practically carrying it down a 60 m long delineated path which the horses must not step out of during the defined trajectory. It is an amazing demonstration of control that can literally pick up a steer and place it wherever it needs to be.

One example of the breed's fantastic endurance was the ride made by the Swiss-born Argentine rider Professor (1894-1954) in 1925-28. Tschiffely took two crioulos, 16-year-old Mancha and 15-year-old Gato, on a 13,350 mile (21,500 km) trek from Buenos Aires to , crossing snow-capped mountains, the world's driest desert, the thickest tropical jungles and riding in all types of weather. Alternating the riding and packing between the two horses, the trio took three years to finish the trip. Although Prof. Tschiffely went through many hardships on the trip including a bout of malaria, the horses did wonderfully in the wide array of extreme topographies and climates. Gato lived to be 36, Mancha lived to be 40 living out the last years of their lives as celebrities in La estancia El Cardal (El Cardal Ranch), the breeding establishment of the man most credited for developing of the crioulo breed, Dr. Emilio Solanet.

* [http://www.justacriollo.com/pages_en/Criollocaracteristiques_en.htm Barré, Gérard. "Summary of the characteristics of the Criollo horse." 2008. Accessed June 26, 2008.]