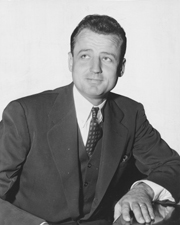 George Armistead Smathers (November 14, 1913 – January 20, 2007) was an American lawyer and politician who represented in the for eighteen years, from 1951 until 1969, as a member of the Democratic Party.

Smathers was born in (his uncle, , was a U.S. senator representing ). His family moved to in 1919, and he attended the for his undergraduate degree and education. At Florida, he was president of his fraternity (), captain of the basketball team, president of the student body, and a member of ; he was later named to the Hall of Fame. After completing his LL.B. in 1938, Smathers returned to Miami, where he served as Assistant United States Attorney from 1940 to 1942. During , he served as an officer in the .

Smathers was a childhood friend of , a fellow Floridian. Graham (1915-1963) would later become Publisher of The Washington Post.

After the war, Smathers was elected to serve two terms in the , representing Florida's Fourth Congressional District from 1947 to 1951. He established a reputation for being a moderate who was resolutely anti-communist.

In 1950 President called Smathers into a meeting at the and reportedly said "I want you to do me a favor. I want you to beat that son-of-a-bitch Claude Pepper."

However, the race is most famous for a speech Smathers never gave. [ Crispell 66-67] A reporter made up a hoax that Smathers gave a speech to a rural audience using fancy words to create the implication that Pepper was sinister. Smathers reportedly had said, "Are you aware that Claude Pepper is known all over Washington as a shameless extrovert? Not only that, but this man is reliably reported to practice with his sister-in-law, and he has a sister who was once a thespian in wicked . Worst of all, it is an established fact that Mr. Pepper before his marriage habitually practiced ," [ [http://abcnews.go.com/US/wireStory?id=2810368&page=3 ABC News: ABC News ] ] While it is sometimes said that "Time" magazine reported these items, the magazine actually referred to the quote as a "yarn." [ [http://www.time.com/time/magazine/article/0,9171,805369,00.html Anything Goes - TIME ] ] The leading reporter who actually covered Smathers said he always gave the same hum-drum speech. No Florida newspapers covering the campaign ever reported such remarks contemporaneously. Smathers offered $10,000 to anyone who could prove he said it, and there were no takers before his death. [ [http://www.sptimes.com/2003/11/29/State/A_born_winner__if_not.shtml State: A born winner, if not a native Floridian ] ]

Smathers served as chairman of the for six years.

Like other Southern Democrats, Smathers voted in favor of his white segregationist constituency and denounced the Supreme Court's "" rulings as a "clear abuse of judicial power." In 1956, Smathers signed the infamous condemning the decision to desegregate the public school system. According to his obituary prepared by the Associated Press, Smathers once agreed to pay the bail of the jailed civil rights leader, Dr. Martin Luther King, but only if King agreed to leave the state of Florida.

In the Senate, Smathers voted against the and tried to water-down other equal rights measures that President put through Congress. He opposed Johnson's elevation of to the Supreme Court.

Smathers befriended and was a groomsman in his wedding, speaking on behalf of JFK at the wedding dinner rehearsal and reception. [http://www.washingtonpost.com/wp-dyn/content/article/2007/01/20/AR2007012000767.html ] During the 1960 presidential campaign, Smathers was a favorite son candidate for the Democratic nomination. He later managed John F. Kennedy's campaign in the Southeast.

Journalist recalls being the network representative in the press pool boat that tried to follow the presidential yacht with Smathers aboard in the early 60's. "Smathers was probably John Kennedy's best friend in the U.S. Senate. Together or singly, they were wolves on on the prowl, always able to find or attract gorgeous prey . . . . It was a joke, our pretending to be covering the president, bobbing around in the ocean, squinting through binoculars to find out who was coming and going but always having our view blocked by a boat just as another long-legged beauty climbed aboard." [p. 95, Mudd, Roger (2008). "The Place to Be: Washington, CBS, and the glory days of television news." New York, New York: PublicAffairs, 95. ISBN 978-1-58648-576-4 (hardcover).]

It was leaked to the press that an emerging scandal involving the corrupt activities of Vice President aide , prompted President John F. Kennedy to privately offer Smathers the second spot on the 1964 presidential ticket and a plan to drop Johnson as his running mate.Fact|date=February 2007

In 1968, Smathers declined to run for re-election and retired from politics. He continued to keep his hand in the game, though, as a lobbyist.

Soon after leaving the Senate, Smathers divorced his first wife, Rosemary Townley Smathers. In addition to lobbying, Smathers became a successful businessman, involved in a wide variety of interests, including automobile dealerships and orange groves. He sold a house on Key Biscayne to JFK's old nemesis, , when Nixon was looking for a residence in Florida.

The former Senator became a rich man as both a lobbyist and businessman. His business interests made him wealthy enough that he was able to make substantial gifts to the University of Miami and the University of Florida. In 1991, Smathers gave a $20 million gift to the library system, now known as the . He later also gave a $10 million gift to the .

*During his life, Smathers personally knew eleven United States Presidents, starting with FDR. He was a close friend of both John F. Kennedy and . When asked to contrast these two very different men, Smathers said that although he was very fond of both, Kennedy was a lot more "fun".

*Smathers was reported to be the only non-Kennedy/Bouvier family member to have been in the highly publicized 1953 wedding in and was co-bestman with .

*Smathers introduced close friend and Key Biscayne neighbor to Richard Nixon. Smathers had recommended as a vacation destination to Nixon. While Nixon was vacationing in Key Biscayne, Smathers had Rebozo take Nixon . Smathers later sold Nixon his Key Biscayne home which became famous as the .

*, a popular destination, is named after the senator.

*Smathers was the last surviving senatorial signer of the and was the last living member of congress from the 1940s.

*Smathers often attended "Church by the Sea", the church in where his funeral was held. [http://www.bradenton.com/mld/bradenton/news/breaking_news/16573373.htm]

*Smathers remains are located in .