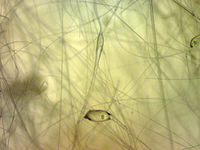 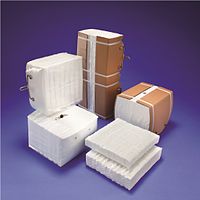 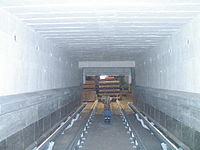 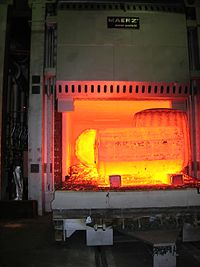 Temperature ranges for the application of HTIW

Applications of Alumino Silicate Wool sorted by sector (in the EU)

Applications of Polycristalline Wool sorted by sector (in the EU)

Comparison of traditional and modern refractories

In the 1950s, the term “Refractory Ceramic Fibre” was coined for the aluminium silicate fibres developed at this time. On account of their chemical purity and resistance to high temperatures (classification temperature >1000 °C) as well as on the basis of their use in other applications, this definition was made to differentiate aluminium silicate wools from the conventional “mineral wools”. Because of the ambiguity of the term “ceramic” and the development of new materials for the high temperature range, the nomenclature was changed to High Temperature Insulation Wool (HTIW) at the end of the 1990s.

Basically, there are two types of inorganic HTIW. In addition to the more commonly used amorphous HTIW (Alumino Silicate Wool ASW/RCF and Alkaline Earth Silicate Wool (AES)), Polycrystalline Wool (PCW) is also available. Owing to the costly production and limited availability compared to mineral wool, HTIW products are almost only used in industrial applications and processes up to 1800 °C.

Man has used fire for melting and heat treating metals for thousands of years. To ensure safe working with the fire, for melting and working metals (bronze, iron), special refractory materials were needed to enable the handling of liquid or hot metals . To meet the needs of the wide-ranging applications, a large number of shaped, dense materials (refractory bricks, chamotte), shaped heat-insulating materials (lightweight refractory bricks) and unshaped refractory materials (heavy- and lightweight ramming mixes) have been developed, which are used for special high temperature applications. For decades, however, other manmade materials have been used for thermal insulation, glass wool and rock wool being used in the low-temperature range (around 200°C to maximum 500°C).

In the 1960s aluminium-silicate-based "Refractory Ceramic Fibre" were launched on the market in Europe. Due to their high temperature-resistance and good technical properties (i.e. good thermal shock resistance and low thermal conductivity), they quickly became the reference for industrial high temperature insulation. Due to the development of new material types the nomenclature of High Temperature Insulation Wool was redefined in Germany at the end of the 1990s. (VDI 3469.[1]). Although even today the term "Ceramic Fibre" or "Refractory Ceramic Fibre" is commonly used it is inaccurate in terms of the materials available, their specific properties and limitations.

Comparison of the mass for the different wall linings

High Temperature Insulation Wool is an accumulation of fibres of different lengths and diameters, produced synthetically from mineral raw materials. The group of the HTIWs include amorphous Alkaline Earth Silicate Wool (AES) and Aluminom Silicate Wool (ASW) as well as Polycrystalline Wool (PCW) (VDI 3469;[1] DIN-EN 1094) with a classification temperatures >1000 °C. Besides the differences in the chemical composition, manmade fibres have parallel edges in contrast to natural fibres.

Also known as “High Temperature Glass Wool" (HTGW), AES Wool consist of amorphous fibres, which are produced by melting a combination of CaO-, MgO-, SiO2 and ZrO2 (see also VDI 3469, Parts 1 and 5[1]). Products made from AES are generally used at application temperatures less than 900 °C and in continuously operating equipment and domestic appliances.

Polycrystalline Wool consists of fibres containing greater than 70 wt.% Al2O3; they are produced by a "sol-gel method" from aqueous spinning solutions. The water-soluble green fibres obtained as a precursor are crystallized by means of heat treatment (see also VDI 3469 Parts 1 and 5[1]). Polycrystalline Wool is generally used at application temperatures greater than 1300 °C and in critical chemical and physical application conditions, also at lower temperatures.

Registration, Evaluation, Authorisation and Restriction of Chemicals (REACH) is a European Union Regulation of 18 December 2006. REACH addresses the production and use of chemical substances, and their potential impacts on both human health and the environment. A Substance Information Exchange Forum (SIEF) has been set up for each type of HITW. AES, ASW and PCW have been registered before the first deadline of 1 December 2010 and can therefore be used on the European market.

Wool is the term used to describe an ordered accumulation of fibres of varying length and diameter. HTIW fulfil this definition and are therefore covered by the term “wool”. Amorphous AES and ASW are produced by melting the raw materials in a melting pot by means of electrical resistance melting. The jet of melt discharged from the pot is accelerated in a blowing or spinning process and pulled into fibres with different length/diameter ratios.

These fibres are produced by means of the continuous filament process with defined nozzle diameters, all fibres having the technical defined and required diameter. During handling, only fibres of the given diameter but different length are released.

Driven by the health effects of Asbestos, extensive research has been conducted to evaluate the potential toxicity of many fibrous materials.

Some dusts if inhaled over a longer period may cause lung disease. Fibrous dust can be released during handling and working with Manmade Mineral and High Temperature Insulation Wool. Fibres with a length exceeding 5 µm, a diameter below 3 µm and a length to diameter ratio that is larger than 3:1 are regarded as respirable. Consequently, regulations on handling and use must be observed that are drawn up and published by the Federal Ministry of Labour and Social Affairs|Federal Ministry of Labour and the associations of the producers of high-temperature insulation wool. Detailed specifications are currently in preparation and will be added.

Research carried out in the European ASW manufacturing industry by the Institute of Occupational Medicine has shown that there was no indication of serious changes in chest x-rays of workers.[2] However, lung forced expired volume in 1 second (FEV1) and forced vital capacity (FVC) decreased with increasing exposure to airborne respirable fibres. Chronic bronchitis and its associated symptoms (cough, phlegm) showed some association with recent exposure to respirable fibres. Changes to the lung pleura seen on the chest radiographs, including pleural plaques, were related to age and exposure to asbestos. Amongst those men who had not worked with asbestos the prevalence of changes increased with increasing time since first exposure to airborne ASW fibres.

Amorphous HTIW (AES and ASW) are produced from a molten glass stream which is aerosolised by a jet of high pressure air or by letting the stream impinge onto spinning wheels. The droplets are drawn into fibres; the mass of both fibres and remaining droplets cool very rapidly so that no crystalline phases form.

When amorphous HTIW are installed and used in high temperature applications such as industrial furnaces, at least one face may be exposed to conditions causing the fibres to partially devitrify. Depending on the chemical composition of the glassy fibre and the time and temperature to which the materials are exposed, different stable crystalline phases may form.

In after-use HTIW crystalline silica crystals are embedded in a matrix composed of other crystals and glasses. Experimental results on the biological activity of after-use HTIW have not demonstrated any hazardous activity that could be related to any form of silica they may contain.