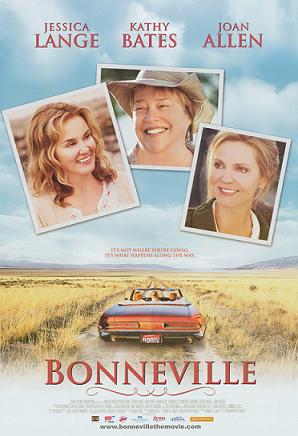 "Bonneville" is a dramedy film directed by starring , and .

Arvilla Holden (Lange) is faced with a major decision and decides to take her two best friends with her in a vintage '66 Bonneville convertible across the American West. They leave Pocatello, Idaho and set out for Santa Barbara, California, making stops in Bryce Canyon and Las Vegas. Along the way they rediscover their friendship and themselves and "come of age" for a second time.

The film received mixed reviews from critics. As of , , the review aggregator reported that 44% of critics gave the film positive reviews, based on 25 reviews. [cite web|url=http://www.rottentomatoes.com/m/bonneville/ |title=Bonneville - Movie Reviews, Trailers, Pictures - Rotten Tomatoes |accessdate=2008-03-04 |publisher=] reported the film had an average score of 44 out of 100, based on 8 reviews. [cite web|url=http://www.metacritic.com/film/titles/bonneville |title=Bonneville (2008): Reviews |accessdate=2008-03-04 |publisher=]