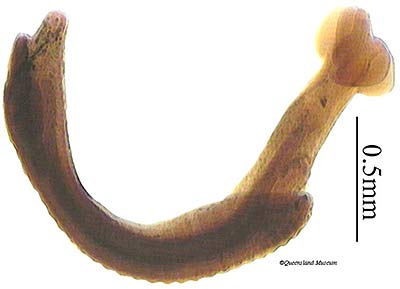 
The Aspidogastrea (gr. "aspid" - shield, "gaster" - stomach/pouch) is a small group of s comprising about 80 . It is a subclass of the trematoda, and sister group to the . Species range in length from approximately one mm to several cm. They are s of and marine s and s (cartilaginous and bony es and s). Maturation may occur in the or host. None of the species has any importance, but the group is of very great interest to because it has several characters which appear to be .

Shared characteristics of the group are a large disc with a large number of small ("suckerlets") or a row of suckers and a with short protrusions, so-called "microtubercles".

of some species have ted patches. Those of "Multicotyle purvisi" have four patches on the side of the sucker and six at the posterior side, those of "Cotylogaster occidentalis" have an anterior ring of eight and a posterior ring of six, while larvae of "Aspidogaster conchicola", "Lobatostoma manteri", "Rugogaster hydrolagi" lack cilia altogether. Larvae of some species hatch from eggs, others do not.

Like most , aspidogastreans use s as an excretory mechanism. The two excretory bladders are located dorsally, on the anterior side of the posterior sucker, connected to ducts, and three flame cell "bulbs" on each side of the body; the ducts contain to aid the flow of excreta.

Aspidogastreans have a of extraordinary complexity, greater than that of related free-living forms, and a great number of s of many different types. The nervous system is of great complexity, consisting of a great number of longitudinal s (connectives) connected by circular commissures. The (cerebral commissure) is located dorsally, in the anterior part of the body, the s dorsally attached to it. A nerve from the main connective enters the pharynx and also supplies the intestine. Posteriorly, the main connective enters the sucker.

Sensory receptors are scattered over the ventral and dorsal surface, the largest numbers occurring on the ventral surface, at the anterior end and on the posterior sucker. Electron-microscopic studies revealed 13 types of receptors (Rohde and Watson, 1990a, b, c).

Their life cycle is much simpler than that of n s, including a and a facultative or compulsory host. There are no multiplicative stages in the mollusc host, as known from all digeneans.

Life cycles have been elucidated for a number of species. "Lobatostoma manteri" is an example of a species which has obligate vertebrate hosts. Adult s live in the of the snubnosed dart, "Trachinotus blochi" (, ), on the . They produce large numbers of eggs which are shed in the . If eaten by various prosobranch , larvae hatch in the , and - depending on the species of snail - stay there or migrate to the gland where they grow up to the preadult stage which has all the characteristics of the adult including a testis and ovary (Rohde, 1973).

Digenean trematodes have been d in various, complex, media. However, their parasitic stages die soon in water. Aspidogastreans may survive for many days or even weeks outside a host in simple physiological saline solution). For example, adult "A. conchicola" survived in water for a fortnight, and in a mixture of water and saline solution for up to five weeks. "L. manteri" extracted from could be kept alive for up to 13 days in dilute sea water in which they laid eggs containing larvae infective to snails (Rohde, 1972). This has led to the suggestions that aspidogastreans are trematodes, not yet well adapted to specific hosts, which have given rise to the more "advanced" digenean trematodes, and that the complex life cycles of digenean trematodes have evolved from the simple ones of aspidogastreans.

Synapomorphies of the trematodes are presence of a "", a posterior sucker (transformed to an adhesive disc in the Aspidogastrea), and life cycles involving molluscs and vertebrates. DNA studies have consistently supported this sister group relationship. The question of whether vertebrates or molluscs are the original hosts of the trematodes, has not been resolved (Rohde, 2001).

This view is supported by the evolutionary relationships of the hosts which these two subclasses utilise. The hosts of aspidogastreans include chondrichthyan fishes (s, rays and s), a group that is 450 million years old, whereas the digeneans, are known from fishes (210 million years old) as well as from various "higher" vertebrates; very few species have invaded chondrichthyans secondarily.

Families within the Aspidogastrea

Rohde (2001) distinguish four families of Aspidogastrea:
* The include a single genus, "Rugogaster", with two species from the rectal glands of holocephalan fishes. It is characterised by a single row of rugae (transverse thickenings of the body surface), numerous , and two caeca. Species of all other families have a single caecum and either one or two testes.
* The include the single species "Stichocotyle nephropis" from the intestine of s. It has a single ventral row of well separated suckers.
* The include the single genus "Multicalyx" from the intestine of holocephalans and elasmobranchs. It is characterised by a single ventral row of .
* The includes species infecting , and . The ventral adhesive disc bears either three or four rows of . Rohde distinguishes three subfamilies of Aspidogastridae, the "Rohdellinae", "Cotylaspidinae" and "Aspidogastrinae".