Meconema thalassinum is an insect in the family Tettigoniidae, known in North America as the drumming katydid and in Europe as the oak bush-cricket. It is native to Europe, but was introduced to the United States, becoming established first in the west of Long Island and having since extended its range there to Rhode Island and Scarsdale, Stony Brook, and Ithaca, New York .[1]

M. thalassinum is a small bush cricket, reaching only 20 mm long, including the female's long ovipositor, although the antennae may reach a further 40 mm forwards .[2] It lives in the foliage of trees, including oaks, where females lay eggs singly under the bark, and where males make an almost inaudible noise by drumming on leaves .[3] 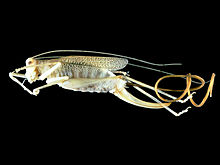 M. thalassinum is a host for the parasitic worm Spinochordodes tellinii. The parasite is able to change the behaviour of the insect making it more attracted to water when it is close to water. This is necessary because the parasite requires open water to complete its life cycle.[4]