Quarenghi's original design for the Smolny Institute, the office of the Governor 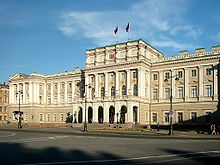 Mariinsky Palace, the seat of the Assembly

According to the federal law passed in 2004, heads of federal subjects, including the governor of Saint Petersburg, are nominated by the President of Russia and approved by local legislatures. If the legislature disapproves the nominee, it is dissolved. The current governor, Valentina Matviyenko was approved according to the new system in December 2006.

Saint Petersburg is also the administrative center of Leningrad Oblast, and of the Northwestern Federal District[3]. 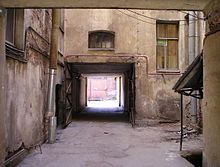 As in other large Russian cities, Saint Petersburg experiences fairly high levels of street crime and bribery. In addition, in recent years there has been a noticeable increase in racially motivated violence. On the other hand, unlike in Moscow, there have been no major terrorist attacks in St. Petersburg in recent years.[4] Between the end of the 1980s and the beginning of the 1990s, Saint Petersburg became home to a number of gangs, such as the Tambov Gang, Malyshev Gang, Kazan Gang, and other ethnic criminal groups, who engaged in racketeering, extortion and often violent clashes with each other.[4]