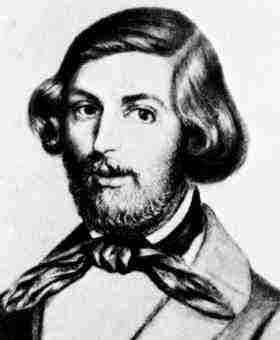 Like Galois and Abel before him, Eisenstein died before the age of 30. He was born and died in , .

From an early age, he demonstrated talent in , and also in . As a young child he learned to play , and he continued to play and compose for the instrument throughout his life.

He suffered various health problems throughout his life, including as an infant, a disease which took the lives of all five of his brothers and sisters. In 1837, at the age of 14, he enrolled at Friedrich Wilhelm Gymnasium, and soon thereafter at Friedrich Werder Gymnasium in Berlin. His teachers recognized his talents in mathematics, but by 15 years of age he had already learned all the material taught at the school, and he began to study from the works of Euler and Lagrange.

At 17, still a student, he began to attend classes given by and others at the . In 1842, before taking his final exams, he traveled with his mother to England (where he sought his father). In 1843 he met Hamilton in , who gave him a copy of his book on 's proof of the impossibility of solving fifth degree polynomials, a work which would stimulate Eisenstein's interest in mathematical research.

In 1843 he returned to Berlin, where he passed his graduation exams and enrolled in the University the following autumn. In January 1844 he had already presented his first work to the , on cubic forms in two variables. The same year he met for the first time with , who would later become his protector. Humboldt managed to find grants from the King, the government of , and the Berlin academy to compensate for Eisenstein's extreme . The monies, always late and grudgingly given, were earned in full measure by Eisenstein: in 1844 alone he published over 23 papers and two problems in .

In June 1844 he visited in . In 1845, Kummer saw to it that he receive an at the . Jacobi also encouraged the distinction, but relations between him and Eisenstein were always rocky, due primarily to a disagreement over the order of discoveries made in 1846. In 1847 he at the University of Berlin, and he began to teach there. attended his classes on .

In 1844 he published two proofs of the law of , and the analogous laws of and quartic (biquadratic) reciprocity. Four years later he was imprisoned briefly by the n army for his revolutionary activities in Berlin.

Eisenstein always had republican sympathies, and while he did not actively participate in the revolution of 1848, he was arrested on of that year. Although he was released just one day later, the harsh treatment he suffered damaged his already delicate health. But his association with the Republican cause led to his official stipends being revoked, despite Humboldt's tenaciously coming to his defense.

Despite his health, Eisenstein continued writing paper after paper on quadratic partitions of and the laws of reciprocity. In 1851, at the instigation of Gauss, he was elected to the ; one year later, this time at the recommendation of Dirichlet, he was also elected to the .

He died of at the age of 29. Humboldt, then 83, accompanied his remains to the cemetery. He had recently obtained, too late, as it turned out, the funding necessary to send Eisenstein on holiday to .

Gauss is said to have claimed, "There have been only three epoch-making mathematicians: , Newton, and Eisenstein". [cite web | title = Review of "Archimedes: What Did He Do Besides Cry Eureka?" |author=Sandifer, Ed| publisher = | url = http://www.maa.org/reviews/archim.html|accessdate=2007-07-23] Gauss's choice of Eisenstein, who specialized in and analysis, may seem puzzling to many, but Eisenstein proved several results that eluded even Gauss, such as the theorem on biquadratic reciprocity.