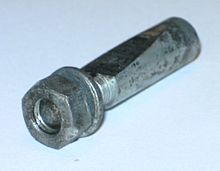 UK cotter from a bicycle crank

Another view, with scale, of bicycle crank cotter

A cotter is a pin or wedge passing through a hole to fix parts tightly together. In British usage cotter pin has the same meaning,[1] but in the U.S. it refers to a different fastener.

Typical applications are in fixing a crank to its crankshaft, as in a bicycle, or a piston rod to a crosshead, as in a steam engine.

Formerly, it was common to mount bicycle cranks using a cotter, though now usually a more easily maintained arrangement is used such as a square tapered or splined interface. These cotters have a short threaded section at the narrower end of the taper, which is used to hold the cotter in place with a washer and nut.