Fools Gold/What the World Is Waiting For

Fools Gold/What the World Is Waiting For

"'Single infobox
Name = Fools Gold/What the World Is Waiting For 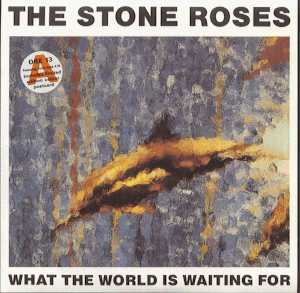 "Fools Gold/What the World Is Waiting For" is a non-album double A-side by . It was released in the UK, U.S., , , , and . "Fools Gold" and "What the World Is Waiting For" are also available on the compilation "Turns Into Stone". "Fools Gold" is also available as the final track on the US release of The Stone Roses self-titled LP, as well as the "Very Best of The Stone Roses" compilation.

"Fools Gold" became the band's biggest commercial hit at the time. It was their first single to reach the Top 10 of the and stayed in the Top 75 for 14 weeks, peaking at #8.

The dance-oriented song showcased the rhythm section of Mani on bass and Reni on percussion. also shone on with its various wah-wah pedal effects. Finally, sang the vocals in a unique whispered delivery. He would also perform with this technique for the track "Something's Burning". The bassline was "inspired" by "Know How" by , which is a sample from the Shaft theme song, performed by . The lyrics reference 's "" and the .

The drum track, though played by Reni, was recorded as he played in time to a sample of Bobby Byrd's rendition of "Hot Pants" at the insistence of John, angering the drummer at the apparent lack of belief in his talent. This was later said to have contributed to Reni leaving the band.

Despite its overwhelming success, the band did not intend to release "Fools Gold" as an A-side. Promo kits originally contained "What the World Is Waiting For" as the A-side, with "Fools Gold" on the . When the press began raving about the song's funky bassline, the band was confused since "What the World Is Waiting For" was a simple guitar based track. The Roses realized the press was referring to "Fools Gold" and they promptly released the songs as a double A-side.

The band's manager of the time, Gareth Evans, was also adamant upon first hearing the song that it was far superior to the intended A-side and should be released as a double A-side.Fact|date=September 2008

After Reni left the band in 1995, "Fools Gold" was essentially retired from the live set, since replacement Robbie Maddix could not emulate Reni's complex drumming loops.

In 1999, a new imprint - - from Silvertone's parent label, Jive, re-issued a remix package, featuring remixes of "Fool's Gold" by and as the lead tracks.

Use of Fool's Gold as a sample

* sampled the bassline and drum beat of Fool's Gold for their hit What's It All About? in 1990. Ian Brown eventually met Reverend Run in 1999 and in an interview with Q magazine Ian recalled their meeting: "I met Reverend Run and said to him 'You may not know me but you sampled us years ago' and then he did the riff from Fool's Gold! Surreal!"
* Fool's Gold was "mashed-up" with If Your Girl Only Knew by for the bootleg "If Only Your Girlfriend Was Stoned"
* A Fool's Gold sample is used in the 1990 song "".

Use of Fool's Gold in film and computer games

As usual, the cover was designed by John Squire and it was called "'Double Dorsal Dopplegänger". [ [http://www.pdmcauley.co.uk/FG.htm P.D.M site] Retrieved 6th September 2008] It consisted of a painting of dolphins on a splattered background, photographed through a pane of frosted glass. The piece was exhibited at Squire's 2004 art exhibitions.

The "Fools Gold" music video featured The Stone Roses performing outdoors and walking across the volcanic landscape of , , one of Squire's favorite vacation spots.

Despite being marketed as an 'Indie' or 'Rock' single, Fool's Gold is viewed by many to be, at heart, a dance record. This notion has been cemented by the song appearing on several dance compilations, usually with other Indie/Dance crossover records such as "Step On" by and 's "Loaded". The video also frequently appears on MTV Dance, usually as part of a 1990 dance retrospective. The song is frequently played in clubs, usually in remixed form and has been re-released as such. The members of the band have never attempted to categorize the tune.

magazine interview ( ): "The song 'Fool's Gold' is about greed. Have you seen 'Treasure Of The Sierra Madre' with Humphrey Bogart ? Three geezers who are skint and they put their money together to get equipment to go looking for gold. Then they all betray each other. They all end up dead, don't they ? That's what the song is about. It's dead right man. But that song is history for us now."