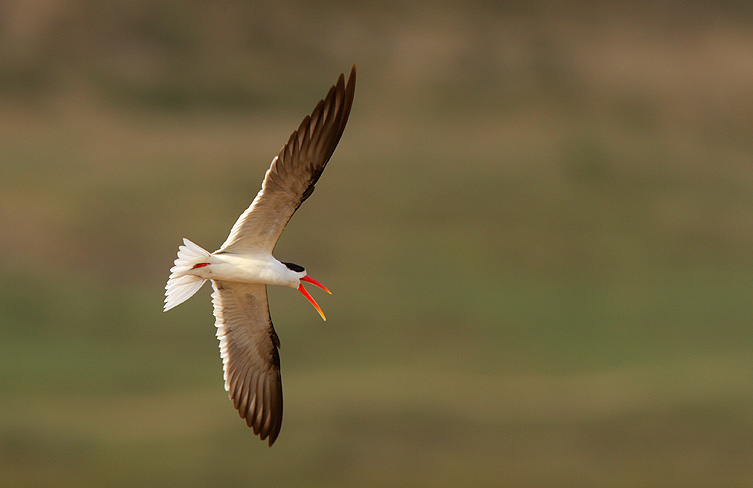 The Indian Skimmer ("Rynchops albicollis") is a species of , one of three members of the family. It is found in southern where it is patchily-distributed and declining in numbers.

It is 40-43 cm long with a wingspan of 108 cm. It is black above and white below with a white collar and forehead. The wings are long and pointed with a white trailing edge. The short, forked tail is white with blackish central feathers. The long, thick bill is orange with a yellow tip and, like the other skimmers, has a lower which is longer than the upper mandible. The legs and feet are red.

Non-breeding adults are duller and browner than breeding birds. Juveniles are grey-brown above with pale fringes to the feathers on the back and wings. The head has more white than in adult birds and the bill is orange-brown with a dark tip.

It has a high, nasal, screaming call but is often silent.

The of the is larger with a black tip to the bill. The is smaller with more black in the tail and no white collar.

It is found on large rivers and lakes, swamps and coastal wetlands such as estuaries. It is most common on freshwater, particularly during the breeding season. Breeding colonies are on islands or sandy spits, usually in rivers.

Its range has become increasingly fragmented in recent decades. It is still found in parts of , northern and central , and and formerly occurred in , and . It is a scarce non-breeding visitor to and has occurred as a vagrant in and central with old records from and .

The birds forage for food by flying low over the water with the bill open and the lower mandible skimming through the water. They feed mainly on but also take small s and e. They often feed at dusk and through the night.

They breed in colonies of up to 40 pairs, often with terns and other birds. The is a simple scrape on the ground. The eggs are usually laid between March and May. They are buff or white with brown blotches and streaks. There are three to five eggs in a clutch.

The species has a decreasing population of 6,000-10,000 individuals and is classed as Vulnerable by the . It is threatened by habitat loss and degradation, pollution and disturbance by humans. Most colonies are unprotected but some lie within nature reserves such as in India.