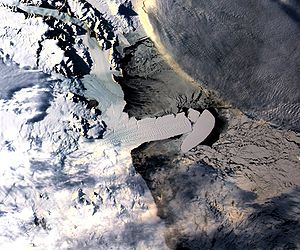 Drygalski Ice Tongue is thought to be at least 4,000 years old.

On March-April 2005, a 3,000 square kilometres (1,200 sq mi) iceberg designated B-15A hit the ice tongue breaking off two pieces, each with a surface of about 70 square kilometres (27 sq mi). This iceberg is a remnant of Iceberg B-15, which calved from the Ross Ice Shelf in 2000. Scientists are also concerned for several penguin colonies which have been isolated from the open sea by the two large bodies of ice.

At the end of March 2006, another iceberg coming from the Ross Ice Shelf, named C-16, hit the ice tongue breaking off a large additional piece (more than 100 square kilometres or 39 square miles).