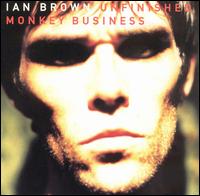 "Unfinished Monkey Business" is the first solo album released by after the break-up of . The album was self-financed and produced by Brown. Ex-Roses including Mani, Reni, Nigel Ippinson, and Robbie Maddix helped pen and perform the instruments on many tracks. "Ice Cold Cube" which premiered at The Stone Roses final concert was officially released in this album.

Much of "Unfinished Monkey Business" focuses on the acrimonious split between Brown and former Roses' guitarist . Brown shares his unabashed opinion of his ex-bandmate on tracks like "Ice Cold Cube", "Can't See Me", "What Happened To Ya" and "Deep Pile Dreams", focusing in particular on John's self-centredness, two-facedness and dependence on drugs, specifically .

The track "Intro Under The Paving Stones: The Beach" was inspired by a slogan from the French May 1968 protests, an event that also inspired the song "Bye Bye Badman" from "The Stone Roses (LP)". A popular protest slogan at the time, "Sous les pavés, la plage!" is translated into English as "Beneath the pavement, the beach!", and refers to the sand found under paving stones ripped up by rioters to use as projectiles aimed at the police.

The words 'deep pile dreams' also appear in ' second album, . As a result, Brown has songwriting credits on the track "French Dog Blues".

Many critics consider "Corpses In Their Mouths" to be Brown's best musical output in the 1990s.