A shotgun slug is a heavy lead projectile, that may have pre-cut rifling, intended for use in a shotgun and often used for hunting large game. The first effective shotgun slug was introduced by Wilhelm Brenneke in 1898, and his design remains in use today. Most shotgun slugs were designed to be fired through a smoothbore barrel, which meant that they must have been self-stabilizing and capable of passing through a choked barrel.

Much later shotguns were produced with rifled barrels, and slugs were designed to be fired from them with spin stabilization. As these specialized shotguns were far more accurate than a smoothbore gun, they also usually feature a mount for optics, such as a scope. Many of these slugs use saboted sub-caliber projectiles, resulting in greatly improved external ballistics performance.

Some less lethal shotgun ammunition is available in the form of slugs made of low-density material, such as rubber. See shotgun specialty ammunition for more information.

Shotgun slugs are used to provide rifle-like performance from a shotgun, by firing a single large projectile rather than a large number of smaller ones. In many populated areas, hunters are restricted to shotguns even for medium to large game, such as deer, due to concerns about the range of modern rifle bullets. In these locations, a slug will provide more range than a load of buckshot.

Slugs are often used by police equipped with riot shotguns. The slugs will provide accuracy sufficient for antipersonnel use out to ranges about 100 yards (91 m). This allows the officer the ability to use the shotgun as a reasonable substitute for a rifle at medium ranges.

The earliest shotgun slugs were just lead balls, of just under the bore diameter, allowing them to pass through a tiny barrel. Often called pumpkin nuts, these slugs showed very poor accuracy, and were only effective at the very close ranges where they could be relied on to hit the target in a vital area. Later types of slugs, such as the Brenneke design, used a weight-based design and rifling-like fins to provide stability and the ability to easily compress and pass through a choked barrel. These could be fired through a smoothbore barrel with reasonable accuracy, and significantly extended the effective range of the shotgun slug. The latest improvement is the saboted slug, fired from a rifled shotgun barrel. The saboted slug and rifled barrel combination provides even greater accuracy than the rifled slugs, and the slugs themselves are more aerodynamic, providing more range and a flatter trajectory.

The Brenneke slug was developed by the German gun and ammunition designer Wilhelm Brenneke (1865–1951) in 1898. The original Brenneke slug is a solid lead slug with fins cast onto the outside, much like a rifled Foster slug. There is a plastic, felt or cellulose fiber wad attached to the base that remains attached after firing. This wad serves both as a gas seal and as a form of drag stabilization, much like the mass-forward design of the Foster slug. The "fins" impart little or no spin to the projectile; the actual purpose of the "fins" is to decrease the bearing surface of the slug to the barrel and therefore reduce friction and increase velocity.

A Foster slug, invented by Karl Foster in 1931, is a type of shotgun slug designed to be fired through a smoothbore shotgun barrel. The standard American domestic shotgun slug, they are sometimes referred to as "American slugs" to differentiate them from the standard "European slug" design popularized by Brenneke.

The defining characteristic of the Foster slug is the deep hollow in the rear, which places the center of mass very near the tip of the slug, much like a shuttlecock or a pellet from an airgun. If the slug begins to tumble in flight, drag will tend to push the slug back into straight flight. This gives the Foster slug stability and allows for accurate shooting through smoothbore barrels out to ranges of about 75 yards (69 m). Most modern Foster slugs also have "rifling", which consists of thin fins on the outside of the slug. Contrary to popular belief, these fins actually impart no spin onto the slug as it travels through the air. The actual purpose of the fins is to minimize the friction on both the barrel and projectile and allow the slug to safely be swaged down when fired through a choke, although accuracy will suffer and choke wear will be progressively accelerated when fired through any choke gauge tighter than open.

It is also possible to fire Foster slugs through rifled slug barrels, though lead fouling (build-up in the rifle grooves) can be a problem. Accuracy is otherwise not appreciably affected in standard shotgun rifling.

Saboted slugs are lead-cored, full copper-jacketed or solid copper projectiles supported by a plastic sabot, which is designed to engage the rifling in a rifled shotgun barrel and impart a ballistic spin onto the projectile. This differentiates them from traditional slugs, which are not designed to benefit from a rifled barrel (though neither does the other any damage). They can take the usual variety of shapes, but for maximum accuracy are typically ogive. The slugs are generally significantly smaller than the bore diameter, increasing the ballistic coefficient, and use the sabot to seal the bore and keep the slug centered in the bore while it rotates with the rifling. Saboted slugs, when fired out of a rifled barrel, are generally far more accurate than non-jacketed slugs out of a smoothbore, with accuracy to 300 metres (330 yd) approaching that of low-velocity rifle calibers. By 1984 "Ballistic Research Industries" was producing a 440-grain (29 g) .50 caliber sabot slug of a new design. The projectile was a wasp waisted hourglass shape made of a hard lead alloy. This sabot slug was not designed for rifled barrels, the self stabilizing shape allowed it to be used with bore cylinder or improved cylinder barrels.[1][2] 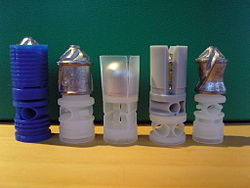 There are some types of all-steel subcaliber slugs supported by a plastic sabot (otherwise projectile would damage the barrel). Examples include russian "Tandem" wadcutter-type slug (the name is historical, as early versions consisted of two spherical steel balls) and ogive "UDAR" ("Strike") slug and French spool-like "Balle Blondeau" (Blondeau slug) and "Balle fleche Sauvestre" (Sauvestre flechette) with steel sabot inside expanding copper body and plastic rear empennage. Made of non-deforming steel, said slugs are well suitable for shooting in brushes, but may produce overpenetration. They also may be used for disabling vehicles by firing in the engine compartment or for defeating hard body armor.

Guns for use with slugs

Many hunters hunt with shotgun slugs where rifle usage is not allowed, or as a way of saving the cost of a rifle by getting additional use out of their shotgun. A barrel for shooting slugs does require some special considerations. The biggest drawback of a rifled barrel is the inability to accurately fire buckshot or birdshot. While it won't damage the gun, the shot's spread increases nearly four-fold compared to a smoothbore and pellets tend to form an O-shaped pattern due to centrifugal force pulling the pellets away from the bore line. In practical terms, the effective range range of a rifled shotgun loaded with buckshot is limited to 10 yards or less. [3] Iron sights or a low magnification telescopic sight are needed for accuracy, rather than the bead sight used with shot, and an open choke is best. Since most current production shotguns come equipped with sighting ribs and interchangeable choke tubes, converting a standard shotgun to a slug gun can be as simple as attaching clamp-on sights to the rib and switching to a skeet or cylinder choke tube. There are also choke tubes of cylinder bore that feature rifling.

Many repeating shotguns have barrels that can easily be removed and replaced in under a minute with no tools, so many hunters will choose to purchase an additional barrel for shooting slugs. Slug barrels will generally be somewhat shorter, have rifle type sights or a base for a telescopic sight, and may be rifled or smoothbore. Smoothbore slug barrels are quite a bit less expensive than rifled barrels.

The recent improvements in slug performance have also led to some very specialized slug guns. The H&R Ultra Slug Hunter,[4] for example, uses a heavy rifled barrel (see accurize) to obtain the most possible accuracy from slugs.

Shotgun slugs are sometimes subject to specific regulation in many countries in the world. Legislation differs with each country.

Shotgun slugs and buckshot are forbidden by law for hunting purposes. Large game (deer and wild boar) hunting is only allowed with large caliber rifles; shotguns are only allowed for small and medium- sized game, up to foxes and geese.

Shotgun ammunition which discharges up to 6 projectiles, including slugs, can be purchased and held on a standard firearms licence, usually for hunting, practical shotgun competition or the euthanasia of animals.

Rifled balls for shotguns are an unusual legal issue in the United States of America. Firearms with rifled barrels are designed to fire single projectiles, and a firearm that is designed to fire a single projectile with a diameter greater than .50 caliber (12.7 mm) is considered a destructive device and as such is severely restricted. However, the ATF has ruled that as long as the gun was designed to fire shot, and modified (by the user or the manufacturer) to fire single projectiles with the addition of a rifled barrel, then the firearm is still considered a shotgun and not a destructive device. In some areas, rifles are prohibited for hunting animals such as deer. This is generally due to range concerns. Shotgun slugs have a far shorter maximum range than most rifle cartridges, and are safer for use near populated areas. In other areas, there are special shotgun-only seasons for deer. A modern slug shotgun, with rifled barrel and high performance saboted slugs, is the top choice for hunters who must hunt with a shotgun, as it provides rifle-like power and accuracy at ranges over 150 yards (140 m).

Shotgun slugs are allowed for hunting wild boar, fallow deer and mouflon. The restrictions also demand that the shot is fired within 40 meters from the game and that the shotgun has only one barrel. The hunter must also have legal right to use a rifle for those games in order to hunt them with shotgun slugs. When hunting for wounded game there are no restrictions at all.