The Olive-throated Parakeet (Aratinga nana), also known as the Olive-throated Conure in aviculture, is a species of parrot in the Psittacidae family. It is found in forest and woodland in two widely disjunct population, with the nominate subspecies restricted to Jamaica and the astec group (including subspecies vicinalis) occurring from north-eastern Mexico, through the Yucatan Peninsula and along the Caribbean slope of Central America as far south as north-western Panama. The two are very similar and most authorities consider them to be part of a single species, but some have recommended splitting them, in which case the former becomes the Jamaican Parakeet (A. nana) and the latter the Aztec Parakeet (A. astec). 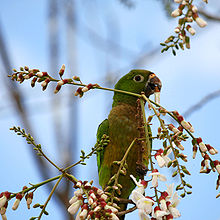 A. n. astec in Guatemala