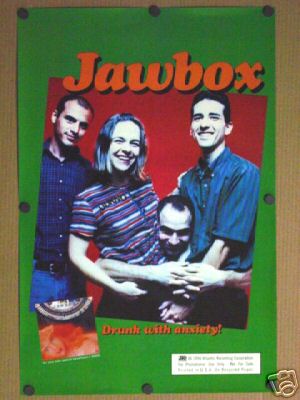 Robbins had played in the final incarnation of , which was the longest lived of the original punk bands. After Government Issue called it quits, Robbins formed Jawbox with Kim Coletta and Adam Wade. The trio recorded their first, self-released single and the "Grippe" . (This was also the beginning of , which went on to become a successful independent record label.) Shortly afterwards, Bill Barbot joined the band as second guitarist and second singer. They shortly thereafter recorded "Novelty" with , and toured the USA.

Wade then left the band to play drums with , and their friend Zach Barocas was called upon to play the drums. Barocas' adoption of various stage-names caused some confusion at the time; he used the monikers Jim Schortz, El Jefe and even borrowed the name of the ese actor .

Jawbox gained some notoriety in the indie music community by becoming one of only two bands to defect from legendary record label for a , when they signed to for 's "" (the other band was ). Some Dischord fans boycotted their records, thinking that the band changed style or had sold out, but the band's sound on its two major label records largely remained faithful to their roots. The band had a minor hit with Savory in . A second single, Cooling Card, was issued and received some MTV and radio play, but it wasn't as popular as "Savory".

The band recorded a second album for Atlantic, produced by , but during the sessions, Atlantic started a vanity label for alternative artists, , which had the band signed to it, and they transferred Jawbox to the new label. In 1996, they released the album, which was surprisingly successful and had a college radio hit with and a cover of ' , but Jawbox was eventually dropped by the label due to a perceived lack of singles on the album.

In early 1997, at the completion of the tour supporting the self-titled record, Barocas decided to move back to New York, and Jawbox called it a day. After the split, Robbins and Barbot, along with former Government Issue drummer, Pete Moffett, formed the band , which itself broke up after releasing two albums. Barbot and Coletta continue to run . Barocas became a part of which, like Burning Airlines, broke up quickly thereafter. Barocas currently plays drums with a Minneapolis rock band, The Million, and publishes poetry. Robbins is currently part of the band Channels, and has also gone on to become a successful producer.

In December 2006, Desoto Records bought the rights of Jawbox's Atlantic Records albums and put them on iTunes and eMusic, along with the Dischord albums and EPs. They also released the albums in stores under the Desoto print and put the videos for all of the major label albums on their site, including their rendition of a song, , originally released as a hidden track on 1996's Jawbox.