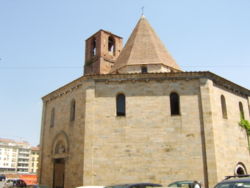 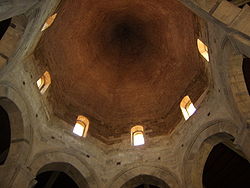 View of the dome from the interior.

Built in the early 12th century (it is known at least from 1113), it was designed by Diotisalvi, who also designed the Baptistery of Pisa Cathedral forty years later.[1] It has an octagonal plan and, until the 16th century, it was surrounded by a portico. The central tambour, supported by eight ogival arches, is super-elevated and is surmounted by a conic cusp.

The attribution to the Holy Sepulchre is a reference to the latter's relics which were carried in Pisa by archbishop Dagobert after his participation to the First Crusade. The structure resembles indeed the Dome of the Rock in Jerusalem, conquered by the crusaders in 1099.

The portals have decorations with animals and lions' heads in marble. The interior, restored in 1720 in Baroque style, was destroyed in the 19th century. What remains include a bust-reliquary of St. Ubaldesca (15th century) with a pail which, according to the tradition, belonged to the saint; the tombstone of Marie Mancini, Mazarin's niece; and a 15th century panel of the Madonna with Child.

The unfinished small bell tower is in Pisane-Romanesque style, with rectangular plan.