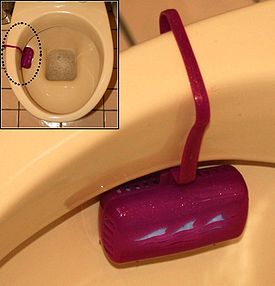 Location and close-up of Toilet rim block in its holder

A Toilet rim block is a disinfectant block used in flush toilets which slowly dissolves in water. They often come sold in a small holder that is attached over the rim of a toilet and hangs down into the bowl, so as the toilet gets flushed, the water passes through the holder coming into contact with the block, however, they also come loose for placement directly in-cistern (so are also usable with squat toilets), although these tend to be slightly different in composition, so as to dissolve slower, due to the constant contact with water. These may also contain a colouring, which shows up in the water (typically blue or green).

The composition of toilet blocks can vary, but they may contain, among other things borax, troclosene sodium or sodium percarbonate (a form of oxygen bleach), sodium carbonate (washing soda) and a perfume.

Recently, there has been the introduction of 'Liquid rim' which has the block, as it were, in liquid form, with the liquid held in a small bottle above and connected to the holder slowly releasing the liquid into the bottom of the holder which is beneath the toilet rim, so coming into contact with the water when the toilet is flushed.

Besides disinfecting and giving fresh scent to the toilet, these blocks are also used to help prevent the build up of limescale in the bowl.