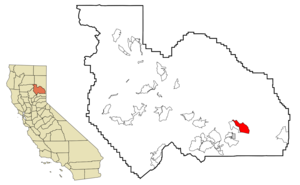 mapsize = 250x200px
map_caption = Location in Plumas County and the state of

Beckwourth is a (CDP) in Plumas County, , . The population was 342 at the 2000 census. According to the USGS National Geographic Names Database, a variant spelling was Beckwith and its name comes from an early explorer who had changed his name from Beckwith to Beckwourth:

Named for James P. Beckwourth (d.1867), adventurer, trapper, and trail blazer who discovered in 1851. Beckwourth built the first house in the Sierra Valley where he operated an inn and trading post. During the 1850's, was the portal of an immigrant route into California through Lassen, Plumas, Butte and Yuba counties known as the Beckwourth Trail.

Nervino Airport (FAA identifier: O02 or "oh-zero-two") is plotted three quarters of a mile east of Beckwourth along State Route 70 on the Reconnaissance Peak, California 7.5 minute quadrangle. It has a convert|4600|ft|m|sing=on runway and is located at coor dms|39|49|05|N|120|21|20|W. [US Geological Survey, Reconnaissance Peak, California, 7.5 minute quadrangle, 1994.] The US Geological Survey says variant names for the airport are "Beckwourth Airport" and "Plumas County Airport". [ US Geological Survey, National Geographic Names Database.]

State facilities in the town may include a State of California, Department of Water Resources maintenance yard and a Caltrans Maintenance Station. These appear to be collocated, (at the same site).

There were 147 households out of which 23.8% had children under the age of 18 living with them, 66.0% were married couples living together, 5.4% had a female householder with no husband present, and 25.9% were non-families. 19.7% of all households were made up of individuals and 10.9% had someone living alone who was 65 years of age or older. The average household size was 2.33 and the average family size was 2.67.

Local news sources are the [http://www.plumasnews.com Portola Reporter] and the Sierra Booster.