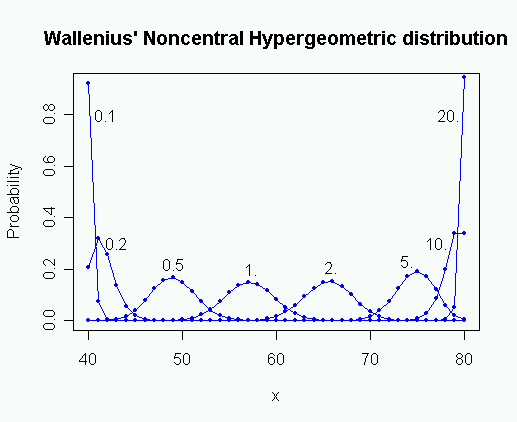 In and , Wallenius' noncentral hypergeometric distribution is a generalization of the where items are sampled with bias.

This distribution can be illustrated as an urn model with bias. Assume, for example, that an urn contains "m"1 red balls and "m"2 white balls, totalling "N" = "m"1 + "m"2 balls. Each red ball has the weight ω1 and each white ball has the weight ω2. We will say that the odds ratio is ω = ω1 / ω2. Now we are taking "n" balls, one by one, in such a way that the probability of taking a particular ball at a particular draw is equal to its proportion of the total weight of all balls that lie in the urn at that moment. The number of red balls "x"1 that we get in this experiment is a random variable with Wallenius' noncentral hypergeometric distribution.

The two distributions are both equal to the (central) when the odds ratio is 1.

It is far from obvious why these two distributions are different. See the Wikipedia entry on for a more detailed explanation of the difference between these two probability distributions.


pdf =
where
cdf =
mean =Approximated by solution to


Wallenius' distribution is particularly complicated because each ball has a probability of being taken that depends not only on its weight, but also on the total weight of its competitors. And the weight of the competing balls depends on the outcomes of all preceding draws.

This recursive dependency gives rise to a with a solution that is given in open form by the integral in the expression of the probability mass function in the table above.

Closed form expressions for the probability mass function exist (Lyons, 1980), but they are not very useful for practical calculations because of extreme numerical instability, except in degenerate cases.

Several other calculation methods are used, including , Taylor expansion and (Fog, 2007, 2008).

The most reliable calculation method is recursive calculation of f("x","n") from f("x","n"-1) and f("x"-1,"n"-1) using the recursion formula given below under properties. The probabilities of all ("x","n") combinations on all possible trajectories leading to the desired point are calculated, starting with f(0,0) = 1 as shown on the figure to the right. The total number of probabilities to calculate is "n"("x"+1)-"x"2. Other calculation methods must be used when "n" and "x" are so big that this method is too inefficient.

The probability that all balls have the same color is easier to calculate. See the formula below under multivariate distribution.

No exact formula for the mean is known (short of complete enumeration of all probabilities). The equation given above is reasonably accurate. This equation can be solved for μ by Newton-Raphson iteration. The same equation can be used for estimating the odds from an experimentally obtained value of the mean.

The distribution can be expanded to any number of colors "c" of balls in the urn. The multivariate distribution is used when there are more than two colors.


support =
pdf =
where
cdf =
mean =Approximated by solution to

The probability mass function can be calculated by various Taylor expansion methods or by (Fog, 2008).

The probability that all balls have the same color, "j", can be calculated as::for "x"j = "n" &le; "m"j, where the underlined superscript denotes the falling factorial as defined above.

A reasonably good approximation to the mean can be calculated using the equation given above. The equation can be solved by defining θ so that:and solving:for θ by Newton-Raphson iteration.

The equation for the mean is also useful for estimating the odds from experimentally obtained values for the mean.

The order of the colors is arbitrary so that any colors can be swapped.

The weights can be arbitrarily scaled:: for all .

Colors with the same weight can be joined::::::where is the (univariate, central) hypergeometric distribution probability. 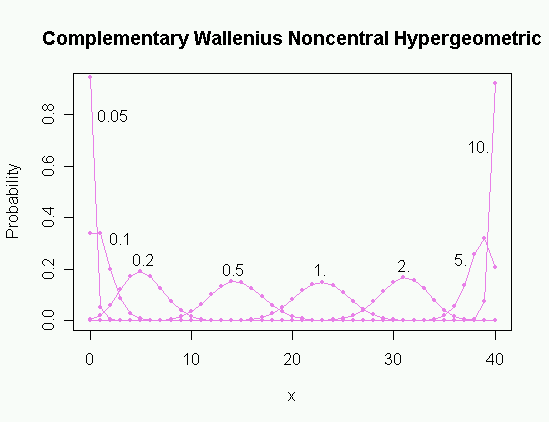