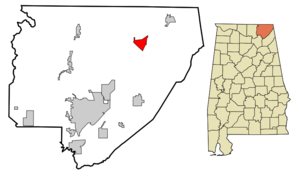 mapsize = 250px
map_caption = Location in Jackson County and the state of

There were 795 households out of which 24.4% had children under the age of 18 living with them, 45.4% were married couples living together, 14.3% had a female householder with no husband present, and 36.1% were non-families. 34.1% of all households were made up of individuals and 15.2% had someone living alone who was 65 years of age or older. The average household size was 2.23 and the average family size was 2.83.

The Stevenson Railroad Depot Museum is located at the heart of downtown Stevenson, Alabama, situated between the tracks of two major railroads. Its mission is to preserve an important part of railroading history through the display of related artifacts. In addition, the museum, which also chronicles modern times, displays hundreds of artifacts from other parts of the area's past to teach young and old alike. These include artifacts recalling Native American culture, pioneer life and Civil War events. Of all these artifacts, the largest, and one of which Stevenson is most proud, is the historic depot building itself.The depot, which was built in 1872 and listed in the National Register of Historic Places, stands on the ruins of Stevenson's first railroad depot, which was built around 1852 for common use by the Nashville & Chattanooga and the Memphis & Charleston Railroads. That original depot was destroyed either during, or shortly after, the Civil War. Bricks salvaged may have been used in the building of the present structure.

Constructed by the Union Army in the summer of 1862 and expanded in 1864, using soldiers and freed slaves, Fort Harker was built on a broad hill a quarter-mile east of the town of Stevenson. It overlooked Crow Creek and was well within firing range of Stevenson’s strategic railroad lines, supply depots and warehouses. Ft. Harker was an earthen redoubt, 150 feet square, with walls that were 14 feet high, surrounded by an 8-foot deep dry moat. It contained 7 cannon platforms, a bomb-proof powder magazine, a draw-bridge entrance and an 8-sided wooden blockhouse at its center. Fort Harker was critical to Union plans. No major fighting occurred here, but skirmishes and sniper attacks were common as territory traded hands between Union and Confederate forces. One other large fort, two smaller redoubts and at least seven blockhouses were constructed along the railroad lines at Stevenson during the Civil War. Stevenson was the major junction for the Memphis and Charleston Railroad and the Nashville and Chattanooga Railroad . In addition to forts, the Union Army established a medical facility and a refugee camp at Stevenson. The remains of Gen. Rosecrans’ headquarters is on the National Register of Historic Places. Both may be seen near downtown Stevenson today.

Every June, the town of Stevenson holds the annual Depot Days celebration. This celebration includes many different aspects of the southern town's culture and celebrates the great things that Stevenson represents. The week-long celebration is concluded with a parade, a day full of activities, and a street dance in the middle of Downtown Stevenson.

Stevenson is the home of the North Jackson High School.