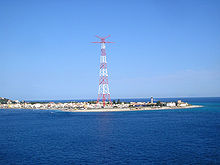 The Pylons of Messina were once used to carry a 220 kilovolt powerline across the Strait of Messina, between the Rizziconi substation in Calabria on the Italian mainland and the Sorgente substation in Sicily.

The two pylons, built in 1957, are both 232 metres (761 ft) high freestanding steel towers. Each pylon stands on an 8 metres (26 ft) tall cross-shaped base and is equipped with a crossbar that carried four conductors at a height of 212 metres (696 ft), and another V-shaped structure at the top which carried two additional conductors and also the ground wires. In contrast to more conventional pylon design, the corners of the pylons are arranged diagonally along the direction of the course of the line. The Pylons of Messina were the model for the Elbe Crossing 1 in Germany and were, until the completion of Elbe Crossing 2, the tallest pylons of the world.

After their completion, the period of the oscillation of the structures and their maximum deflections were determined in a very unusual manner: engineers mounted three rockets with a thrust of 9800 kilonewtons on top of the pylons and ignited them.[1]

To cross Strait of Messina, the overhead power lines had to have a very large span of more than 3 kilometres (1.9 mi). Because of the span, and the maritime traffic in the strait below, the conductors needed to have sufficient minimum height above ground, and had to be constructed with a great tensile strength. This required the use of steel cables as conductors even though steel has the disadvantage of poorer electrical conductivity than normal aluminium overhead power lines. The danger of oscillations caused by wind did not allow the usage of bundled conductors. Thus, the original overhead line across the Strait did not meet modern operational standards and the entire power line was replaced in 1994 by a submarine cable.

After their decommission as power lines, the now-unused pylons remain with protected status as historical monuments and are used for meteorological measurements, high altitude rescue training and telecommunications. Since 2006, it has been possible to visit the pylon on the Sicilian shore; however, one has to use a stairway with 1,250 steps to get to the top.[2]