Even in the Quietest Moments

Even in the Quietest Moments 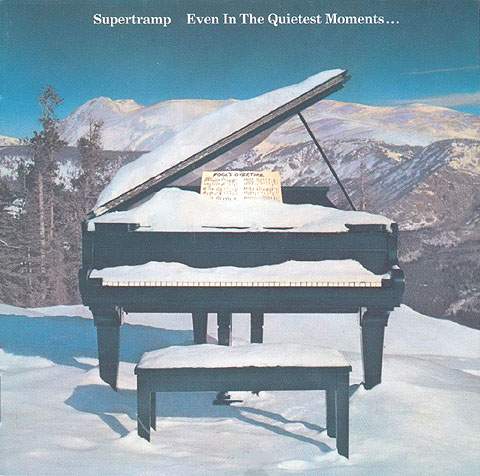 The album was recorded mainly at Caribou Studios in Colorado with overdubs, vocals and mixing completed at The Record Plant in Los Angeles and was Supertramp's first album to use engineer Peter Henderson, with whom the band would work for the rest of Roger Hodgson's tenure.

Even in the Quietest Moments reached #16 on the Billboard Pop Albums Charts in 1977 and within a few months of release became Supertramp's first Gold (500,000 copies or more) selling album in the US thanks to "Give a Little Bit" being a US Top 20 single.

A remastered CD version of the album with full original artwork, lyrics and credits restored (including the inner sleeve picture of the band absent from the original CD) was released on June 11, 2002 on A&M Records in the US. The cover photo is not doctored - a grand piano was placed on a mountain top at Caribou Studios, covered with snow and photographed.

While "Give a Little Bit" was the big hit, both "Fool's Overture" and "Even in the Quietest Moments" got a fair amount of FM album-rock play.

All songs written by Rick Davies and Roger Hodgson.

*This album is unique in the Supertramp discography as none of the songs feature the band's trademark .
*The album cover is an actual photograph; a piano was taken up the Cannonball Lift at , near , during a snowstorm.
*The sheet music on the album cover is labelled "Fool's Overture", but the notes play "The Star Spangled Banner."
*"Fool's Overture" was used for many years as the theme song on the Canadian television show "W5" [http://www.ctv.ca/servlet/ArticleNews/show/CTVShows/20031017/wfive-history/20030924]

The 1997 and 2002 reissues were mastered from the original master tapes by Greg Calbi and Jay Messina at Sterling Sound, New York, in 1997 and 2002. The reissues were supervised by Bill Levenson with art direction by Vartan and design by Mike Diehl, with production coordination by Beth Stempel.

Both the 1997 and 2002 remasters are heavily criticized by audiophiles who claim they were mastered too loud as part of the "" mastering trend.Also the song "Loverboy" has been edited and is missing a couple of bars.