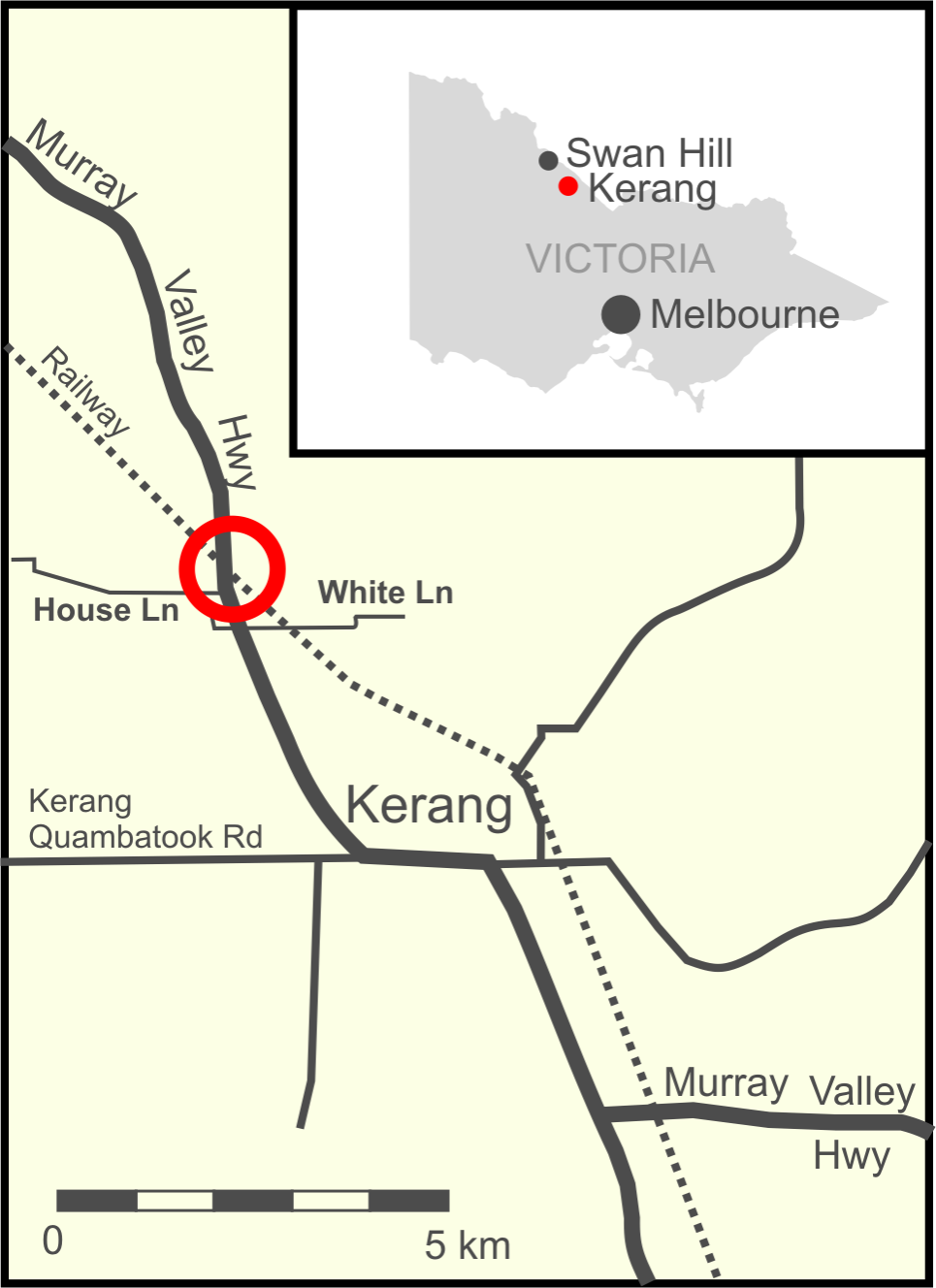 The Kerang train collision occurred on at about 1:40 pm AEST in the n state of Victoria, approximately convert|6|km|mi|1|lk=on north of the town of Kerang in the state's northwest, and convert|257|km|mi|0 north-northwest of the city of .

Southbound passenger train service 8042 which consisted of locomotive N460 and carriage set N7 and a northbound semi-trailer truck collided at a where the Swan Hill railway line crosses the . The locomotive and first carriage escaped impact as the truck swerved left. However, the second carriage and third carriages were both struck, causing major structural damage and fatal injury to passengers.

The train involved in the accident was a locomotive-hauled service from Swan Hill that departed for at 1:00pm,

Emergency response was swift, with a number of seriously injured people airlifted to Melbourne while others were taken by road or air ambulance to nearby Kerang Hospital. Premier Bracks flew to the crash scene on the evening of 5 June with Victoria Police Assistant Commissioner Noel Ashby and Opposition transport spokesman Terry Mulder, calling it a "horrific scene".

Both the Federal Minister for Transport and Regional Services and Prime Minister spoke to the media, offering Federal government aid to families as well as the investigative assistance of the . Leader of the Opposition said that he was "saddened and shocked" by the incident and went on to say that his "thoughts and prayers tonight are with those still fighting for their life in hospitals throughout Victoria." [cite news|title=PM offers train crash help|url=http://www.theaustralian.news.com.au/story/0,20867,21854188-1702,00.html|work=|date=|accessdate=2007-06-05]

V/Line announced it will support a full inquiry and had arranged counselling for the passengers and their families. Chief executive Rob Barnett said the incident would raise questions about the safety of level crossings, but asked everyone to resist jumping to conclusions.

Work is set to commence on restoring services once the accident site has been released by accident investigators.

The driver of the semi-trailer was charged with one count of culpable driving and on 7 June was bailed to appear before Bendigo Magistrates Court on 19 December. A police spokesman stated that more charges are expected to be laid in due course.

One survivor recalls, "A lady sitting across from me saw the truck and closed her eyes. You just wonder how anybody got out."

Ursula McGuiness, General Manager for V/Line noted that the level crossing was protected with lights and bells, which were still sounding and flashing when emergency services arrived, but did not have boom gates.

Recently, there had been timetable changes on the line according to Kerang resident and councillor Lui Basile.

On , the Office of the Chief Investigator, Department of Infrastructure, released Rail Safety Report 2007/09, detailing the findings of the investigation into the collision. The report noted that the train, truck, and level crossing warning signals were all serviceable prior to the incident, and both the train and truck driver were familiar with their respective routes. The report noted that the truck driver did not agree to be interviewed by investigators, and concluded that "For reasons not determined the truck driver did not respond in an adequate time and manner to the level crossing warning devices."