Antonio Cesti (Italian pronunciation: [anˈtɔːnjo ˈtʃesti]) (bap. 5 August 1623 – 14 October 1669), known today primarily as an Italian composer of the Baroque era, he was also a singer (tenor), and organist. He was "the most celebrated Italian musician of his generation".[1]

He was born at Arezzo, and studied with various local musicians. In 1637 he joined the Franciscan order. While he was in Volterra he turned more toward secular music, probably due to the patronage of the powerful Medici family. Here he also came in contact with Salvator Rosa, who wrote librettos for a number of Cesti's cantatas. By 1650 Cesti's calling as a monk and his success as a singer and composer for operas was coming into conflict, and he was officially reprimanded. In 1652 he became a member of the court at Innsbruck of Ferdinand Charles, Archduke of Austria. After holding a post somewhere in Florence as maestro di cappella, he entered the papal chapel in 1660. In 1666 he became Vice-Kapellmeister at Vienna, and died at Venice in 1669. 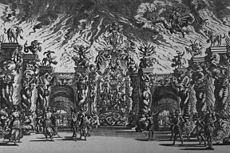 Cesti is known principally as a composer of operas. The most celebrated of these were La Dori (Venice, 1663), Il pomo d'oro (Vienna, 1668) and Orontea (1656). Il pomo d'oro (The Golden Apple) was performed for the wedding of Emperor Leopold I. It was far more elaborate than contemporary Venetian operas, including a large orchestra, numerous choruses, and various mechanical devices used to stage things like gods descending from heaven (deus ex machina), naval battles, and storms. Orontea was revived seventeen times in the next thirty years, making it one of the most frequently performed operas on the continent in the mid-17th century. Even Samuel Pepys owned a copy of the score.

Cesti was also a composer of chamber cantatas, and his operas are notable for the pure and delicate style of their airs, more suited to the chamber than to the stage. He wrote in the bel canto style of the 17th century, and his compositions were heavily influenced by his career as a professional singer. Cesti's musical writing owes much to the emerging tonality of the time.