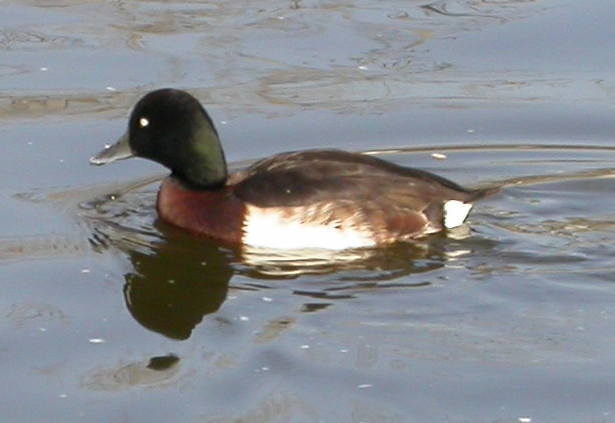 Baer's Pochard ("Aythya baeri") is a found in eastern . It breeds in Southeast and north-east , migrating in winter to southern China, and . The name commemorates the Estonian naturalist .

It is similar in size and stance to its close relative the ("A. nyroca"), although the coloration of the drakes (males) is entirely different. Baer's Pochard males are similar to those of the ("A. marila"), but have a dark back and upper flanks; the white lower flanks and belly are conspicuous. The females of Baer's Pochard and the Ferruginous Duck are quite similar, but that holds true for the females of almost all "" .

Formerly classified as an by the [BLI (2004)] , recent research shows that its numbers are decreasing more and more rapidly. It is consequently uplisted to status in 2008 [BLI (2008)] .

*|year=2004|id=2451|title=Aythya baeri|downloaded=11 May 2006 Database entry includes a range map, a brief justification of why this species is vulnerable, and the criteria used
* (2008): [http://www.birdlife.org/action/science/species/global_species_programme/whats_new.html [2008 IUCN Redlist status changes] . Retrieved 2008-MAY-23.