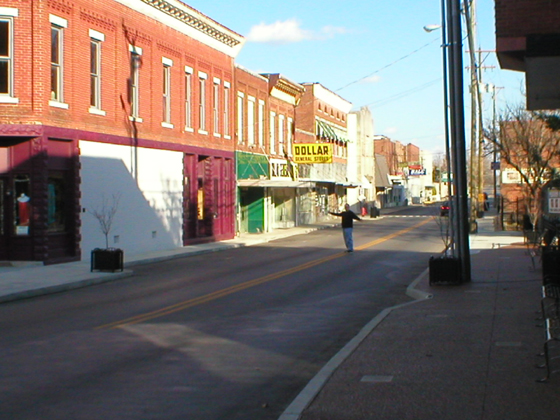 The city is best known for the large natural opening located on the south side of Main Street, from which the town's name is derived. As for the historical reason for the odd name, various legends are told. One has it that Native Americans historically hid horses in the cave. A similar tale is that an early carriage may have lost its horse to an accident, when the horse fell into the cave opening. Another, more likely, reason for the name is that the word horse was simply a 19th century implying huge. The cave opening is large, and this is the most likely reason for the odd name. ("Hoss" is a Swedish word for "big in stature and big in spirit"; in the 19th Century, "Hoss", or "Horse", over time, became the Southern equivalent word, implying something that was huge or large.)

The cave itself has figured prominently in the history of the town. Around the period, the world's only air-conditioned courts were located in the entrance of the cave. Likewise, many of the early buildings alongside Main Street derived their air-conditioning from the cave. Inside the cave is a large, fast-flowing , and the cave itself is also known as Hidden River Cave. This energy source provided the energy to drive a , and, for a while in the late 19th Century, Horse Cave was the only town outside of Louisville to have electric lights in .

The town's drinking water was also taken from the cave. Unfortunately, due to an incomplete understanding of the underground water flow in the region, seeped into the cave, and hence into the drinking water, and the cave became severely polluted. The outcome was that the cave was shut down for tours for over 50 years. During the 1960s, the stench was so bad that pedestrians would cross to the other side of Main Street, rather than walk near the cave's opening. Birds flying over the cave's opening could be seen struggling to breathe, falling from the sky into the opening of the cave. Fortunately, efforts made to prevent polluting ground water in the region, coupled with the natural regenerative effects of the running water, have largely restored the cave to a pristine condition. Tours have resumed once more, the outcome of a successful anti-pollution effort by various levels of government.

The town of Horse Cave dates only to around the time of the Civil War. A stop on the at this location led to the development of commerce. For at least a short period of time, the town was also known as Caverna, before returning to the name of Horse Cave. The local school district, which is an independent school district crossing three counties and encompassing Horse Cave, Cave City, and Mammoth Cave, is still known as the Caverna Independent School District.

Historically, Horse Cave has been a major center of agricultural commerce for Hart County, Metcalfe County, Green County, and the northeastern part of Barren County since at least the 1870s. warehouses located here have provided the majority of the income, although factory work has been growing since the 1970s.

Tourist attractions include the , [http://www.kdu.com/ Kentucky Down Under] /Kentucky Caverns, and the nearby . Civil War Days are an annual tourist event, during which time parades down Main Street and re-enactments of a [http://www.cr.nps.gov/hps/abpp/battles/ky004.htm Civil War battle at Rowlett's Station] , between Horse Cave and are staged.

Horse Cave is also the birth place of former player .

There were 977 households out of which 28.0% had children under the age of 18 living with them, 40.2% were married couples living together, 18.2% had a female householder with no husband present, and 38.4% were non-families. 34.8% of all households were made up of individuals and 16.8% had someone living alone who was 65 years of age or older. The average household size was 2.21 and the average family size was 2.84.

A large Bamboo Research Station is North of Horse Cave . It is said to contain, the states largest collection of bamboos .