Porrentruy (German: Pruntrut) is a Swiss municipality and seat of the district of the same name located in the canton of Jura.

With a population of 6593 (as of the end of 2005) Porrentruy is the second-largest town in the canton of Jura. Of that population, 89.5% are French-speaking, 2.8% are German-speaking, and 2.2% Italian-speaking. The highest population was recorded in 1970, with 7827 inhabitants. Since then, the population has continuously decreased.

Porrentruy lies on the Swiss Federal rail lines Delle-Delémont-Basel and Delle-Delémont-Bienne. There is also a local rail line of the Chemins de fer du Jura (CJ) Porrentruy-Bonfol. Originally, in 1868, Porrentruy was connected to France and Paris by train via Boncourt and Delle. The line is being electrified between Delle and Belfort at the present time and is replaced by an hourly bus service.

The municipality lies on the first stretch of the motorway (A16 or E27) to open (in 1998) in the canton of Jura between Delémont and Belfort, France. The motorway is still not completed in 2009 because of the difficult topography of the Jura. This explains why the international railway played such an important role in the economic rise of Porrentruy because the railway follows the course of the Allaine river to the economic rail hub at Belfort.

In the course of the 19th century, Porrentruy developed from a trading center to an important industrial town, with traditional industries such as watchmaking, shoemaking, and textiles. In the 20th century, other important industries were added, notably metalworking, machine manufacturing, electronics, and furniture building. Agriculture is no longer a major factor in the labor market of the municipality.

Porrentruy is the site of many important institutions of the canton of Jura, including the cantonal courts, and also of the archives of the former Episcopal See of Basel. It is also the location of the Université Populaire Jurassienne.

In 1988, Porrentruy was awarded the Wakker Prize for the development and preservation of its architectural heritage. 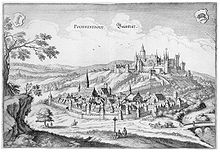 This view of Porrentruy dates from the 17th century.

The first known settlement in what became Porrentruy goes back to Roman times. In 1983, ruins of a temple were discovered in the cemetery on the north of town, and Roman coins were found there. 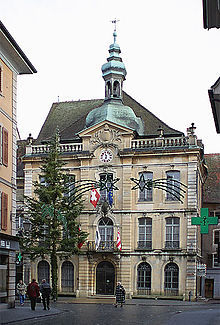 The first historical mention of the name occurs in 1136 as Purrentru. The name presumably comes from the Latin pons Ragentrudis (Ragentrud bridge). Ragentrud was the wife of the Frankish King Dagobert I. The German form of the name, Pruntrut may have a separate etymology from Bruntrutum, which means an abundant spring.

Porrentruy first belonged to the county of Montbéliard, before it became subject to the Bishop of Basel in 1271. When the town was invaded by the Burgundians, King Rudolf I of Habsburg entered the town and forced its return to the Bishop of Basel. He also declared it a free Imperial city on April 10, 1283. Financial difficulties forced the Bishop to sell the Ajoie (including Porrentruy) back to the lords of Montbéliard in 1386. But in 1461, the town once again became subject to the episcopal see. Because of the Reformation in Basel, the Bishopric moved its official headquarters to Porrentruy in 1527. Under Bishop Jakob Christoph Blarer von Wartensee, who reigned from 1575 to 1608, the town reached the apogee of its importance. In his time, many architectural projects, including expansion of the castle and the building of a Jesuit college, were undertaken. This period of prosperity ended in 1618 with the outbreak of the 30 Years' War. Porrentruy was repeatedly occupied, besieged, and plundered.

In 1792, French Revolutionary troops conquered Ajoie. Porrentruy became the capital of a dependent republic, which was then incorporated into France in 1793 as the Département du Mont Terrible. In 1800, this department was incorporated into the Département du Haut-Rhin. After the fall of Napoleon, the municipality was given to the Canton of Bern (in 1815) to compensate for the loss of the Canton of Vaud, which had become a separate canton in 1803.

Until World War I, Porrentruy was the cultural center of the region and had a larger population than Delémont. However, with the increase in automobile traffic, its situation on the edge of the country became a liability and caused economic stagnation. In the second half of the 20th century, tensions between the French-speaking minority in the Canton of Bern and the German-speaking majority led to the creation of the new Canton of Jura on January 1, 1979. To the chagrin of the inhabitants of Ajoie, Delémont was chosen as the cantonal capital.

The scenic historic city center has many buildings in gothic, baroque, and neo-classical styles, notably the buildings of the Jesuit college, which are now used by the cantonal school. The only remaining medieval city gate is the Porte de France, which was built in 1563.

The Catholic church of Saint-Pierre is a gothic basilica that was built from 1330-50. It houses valuable relics and has a late-gothic altar. The Catholic church of Saint-Germain, was built in the 13th century and restored and expanded in 1698. The chapel of the Jesuit college (1599–1603) has an octagonal tower built in 1701, which is now used as a concert hall. The church of the Ursulines was dedicated in 1626.

On a prominence stands the Château de Porrentruy, which was the residence of the Bishop of Basel from 1527-1792. The oldest part is the round Bergfried, which was built in 1271.