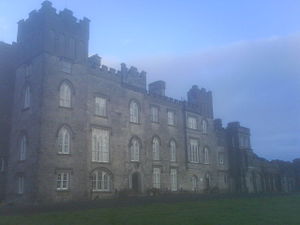 Dunsany Castle (Irish: Caisleán Dhun Samhna), Dunsany, County Meath, Ireland is a modernised Norman castle, started c. 1180 / 1181 by Hugh de Lacy, who also commissioned Killeen Castle, nearby, and the famous Trim Castle. It is possibly Ireland's oldest home in continuous occupation, having been held by the Cusack family, and their descendants by marriage, the Plunketts, to the present day. The castle is surrounded by its demesne, the inner part of the formerly extensive Dunsany estate; the demesne holds an historic church (still consecrated), a working walled garden, a walled farm complex, an ice house, various dwellings and other features.

Dunsany Castle and demesne, and other remnants of the family estates, are situated in and near the townland of Dunsany, between the historic town of Trim and Dunshaughlin. At Dunsany Cross(roads) is a hamlet, with a post office store, Catholic church and primary school, and a mix of private housing with a small local authority development. The former Dower House is located just east of the hamlet. The demesne can be reached from the N3 road and from Trim, and is signposted from the Navan Road, from Dunshaughlin and from Warrenstown, near the former railway station for the area, at Drumree. The next village is Kilmessan, and today Dunsany and Kilmessan together form a single Catholic parish.

The castle was built, probably in succession to basic "motte" fortifications, remnants of which can still be seen to the left and right in front of it, in the period 1180 - 1200, construction being thought to have begun in 1180 / 1181. Foundations and the lower parts of the four main towers are thought to be original, and some interior spaces, notably an old kitchen, but much additional work has been carried out, especially in the 18th and 19th centuries, and the current castle is more than three times the size of the original.

The castle, along with Killeen Castle, was held by the Cusacks, initially on behalf of the de Lacys, and passed by marriage in the early 15th century to the Plunketts. Originally, it and Killeen lay on a single estate but the first generation of Plunketts gave Killeen to the eldest son, and Dunsany to the younger, Christopher, following which the estate was divided, and the Castle descended in the hands of the Barons of Dunsany, who enjoyed almost uninterrupted ownership, aside from issues around Oliver Cromwell's operations in Ireland (the then Lady Dunsany defended the castle against an initial approach but the family were later forced out, some dying on the way to Connaught), and the aftermath of some other troubles between Ireland and England. They were cousins of Saint Oliver Plunket.

The Dunsany Estate was reduced by the operation of the Land Acts in the late 19th and early 20th century but the castle is still surrounded by its original demesne, and other estate lands remain around the district, some adjacent to the demesne and some remote.

Much of the work of the writer Lord Dunsany was done at the Castle, notably in a room in one of the building's towers.

Since the 1990s, work has been carried out, with some attendant publicity, to restore some of the Dunsany properties in the immediate area and in Trim. The family's other castle, the largest in Ireland but a ruin, Trim Castle, was transferred to the State in the 1990s.

The Castle is entered through a projecting porch and a lobby with a worked plaster ceiling, which opens into the central hallway, featuring the principal stairway and a vaulted ceiling, and into a secondary hall. The ground floor holds the grand dining room, with portraits of past family members, and a fine arts and crafts billiards room, as well as kitchen spaces, ancient and modern, and other rooms. On the first floor are the library, and drawing-room, which has Stapleton plasterwork from 1780. The library, which may have been worked on by James Shiel, is in the "Gothic Revival" style, with a "beehive" ceiling. Also on this floor is a secondary stairway (where a "priest's hole" for hiding Catholic ministers formerly existed). The third floor holds ornate bedrooms.

The demesne is surrounded by a drystone wall, much of which was built during the Great Famine as a relief work.

The main entrance to the grounds today, opposite a medieval pilgrim cross, has the appearance of a Gothic ruin but is a "sham", concealing a residential "gatehouse" lodge, and with a solid black metal gate. Just behind this is the former Steward's House, a curious sunken structure, and just west on the public road is an access road for the demesne farm.

The former main gateway, leading to a long avenue which abruptly reveals the castle to arrivals, has a tower lodge and high white gates. A third gateway, at Dunsany Bridge, over the River Skane, had a curious black-stone lodge, which was vandalised in the 1980s.

Church of St. Nicholas ("The Abbey")

The Church of St. Nicholas (of Myra), known locally as "the Abbey", was built in the 1440s, on the site of an earlier church (standing in 1305). It is now a National Monument, with remnants of lofts and living quarters, and inside and around are tombs of family members and local residents. While it fell out of use and a new church was built at Dunsany Crossroads, it is still consecrated, and a wedding Mass was celebrated there (with a temporary roof installed) in the early 2000s, with the Bishop of Meath.

There is a full-scale walled garden, over 3 acres (12,000 m2) in size, still producing fruit and vegetables for the estate. A cottage, historically occupied by the senior gardener, is built into the walls of the garden. Nearby are working beehives.

Also within the demesne are stone-built farm and stable yards, an ice-house and wells. There is a home within the stable yard, and at least one ruined cottage near the walls.

The lands comprise a mix of farmland, marsh and woodland. At the back of the demesne, alongside the old Dublin-Navan railway line, is the River Skane, a tributary of the River Boyne.

The castle can be visited on a certain number of days each year, for a fee.

The castle and demesne have been used for filming on occasions, for example for Braveheart (the wedding scene was filmed in the Church of St. Nicholas, for example) and the remake of The Magnificent Ambersons.