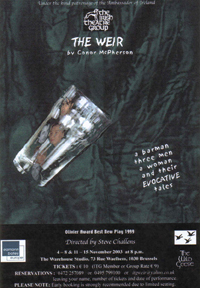 The play is set in a small rural in a fictional town called Carrick, which is said to be in the west of , near Northwest Leitrim, or .

*Jack, a and garage owner in his fifties.
*Brendan, the owner of the pub in which the play is set. He is in his thirties.
*Jim, Jack's assistant, in his forties.
*Finbar, a local businessman in his late forties.
*Valerie, a Dublin woman in her thirties.

Reviews of "The Weir" have been positive. It won the Lawrence Olivier BBC Award as the Best New Play of 1997–98.