Diary of a Wimpy Kid

Diary of a Wimpy Kid

This article is about the original book. For other uses, see Diary of a Wimpy Kid (disambiguation).

The book opens with Greg Heffley saying how embarrassing it is to be having a journal with "diary" on the front and that when someone sees him with it will call him a "sissy".[3] Greg also goes to mention that one day he will become rich and famous but for now he is "stuck in middle school with a bunch of morons".

Greg faces too many hardships, including Halloween. As Greg and Rowley go Trick-or-Treating, they anger some teenagers who chase them. They barely escape but manage to get to Greg's grandma's house, the teenagers see them inside and so Greg and Rowley taunt them. Not all goes to plan though and when they get home and Greg's dad, who was hassled by kids, throws water at them and the water soaks their candy.

The Wizard of Oz play[6] is also a hardship for Greg, Patty Farell, who plays Dorothy, is coming on stage, and since Greg is a Tree, he thinks he can throw apples at her, but the director takes it out for health and safety. Mrs. Norton, the music director, tries to make the Trees sing an embarrassing song, but on the night nobody sings out of fear and the play is ruined.[7]

Greg and Rowley's friendship is starting to fall apart. Greg invents a game where one person would throw a football to make the other fall off the Big Wheel, A gift Rowley got for Christmas, however when Rowley falls off ,he breaks his arm. Greg is jealous of the attention Rowley is getting. Rowley is also framed for scaring kindergardeners, when it was Greg wearing Rowley's hat. When Greg confesses, Greg is kicked out, and Rowley is promoted. Rowley also declares himself the owner of a comic strip, Zoo-Wee-Mama, that was created by Greg and Rowley, but Greg drops out to make his own comic strip. The two stop being friends.[3]

Greg and Rowley get into a fight at the blacktop, when the teenagers from Halloween come, and grab Greg and Rowley. They make Rowley eat the cheese, and are to make Greg do it too, but Greg finds a way out. The students however notice the cheese is gone. Greg, being a good friend to Rowley, lies and says he threw it away, but this gives Greg the Cheese Touch. Greg and Rowley becomes friends again, and Greg begins to see the good advantages of having the Cheese Touch.[3]

According to an author interview, Jeff Kinney said the idea of Wimpy Kid came from "I wanted to write a story about the funny parts of growing up, and none of the serious parts. I had a pretty ordinary childhood, but lots of humorus stuff happened along the way. So, I decided to write a book about what it was really like to be a kid, or at least what it was like for me."[12] 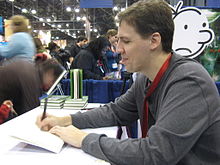 Diary of a Wimpy Kid is a 2010 American comedy film directed by Thor Freudenthal and based on Jeff Kinney's book of the same name.[13][14][15] The film was released on March 19, 2010. It was released on DVD, iTunes, and Blu-ray on August 3, 2010. [16]The movie stars Zachary Gordon as Greg, Robert Capron as Rowley, Steve Zahn as Greg's father, Rachael Harris as Greg's mother, Devon Bostick as Rodrick, Chloë Moretz as a new character named Angie, and Connor and Owen Fielding as Manny. The film was released on March 19, 2010.[17]