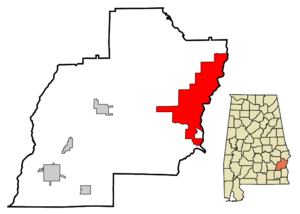 Beginning no later than 1733, the site along the that is now modern-day Eufaula was occupied by three tribes of the . The most dominant of the three, and most open to contact with whites, was named "the " (pronounced "you-fall-uhs.") In 1823, families from Georgia, looking for fertile crop land, established a permanent white settlement on the high bluffs of the area and adopted the Creek village's name.

General William Irwin, a hero of the , was granted several thousand acres of land in nearby Henry County. One of the most prosperous men in the area, he served as its first State Senator. With his influence, he promoted the area's development and established the first wharf along Eufaula's high bluffs. This set the stage for the town's rise to prominence as a center of trade. In his honor, Eufaula was renamed the city of "Irwinton."

Attracted by the area's rich soil, and further encouraged by the opening of the Federal Road, white settlers swarmed the area. Due to the , in 1832, the Creeks were forced to abandon their land rights in the area and Barbour County was incorporated. The Creeks were reconsolidated with others tribes in Muscogee Nation in upper , thus leaving their native homeland forever.

In 1834, Captain Seth Lore and others developed what is now the downtown area, naming the four main north-south avenues "Livingston," "Orange," "Randolph," and "Eufaula" (L-O-R-E.) The of Eufaula now encompasses much of the oldest part of the city. In late 1843, the town was re-named "Eufaula," because the mail was constantly misdirected to .

The town became a major shipping and trading point for surrounding counties in Georgia and Alabama. Its many impressive homes and businesses attest to the wealth and culture of the period. Eufaula became politically powerful, and the "Eufaula Regency," as early as the late 1840s, supported of from the United States. After the start of the six companies of infantrymen and cavalrymen (an impressive number considering the population of the area at the time) came from Eufaula and its encompassing county, Barbour County. These men fought for the in battles as far away as . They also developed a reputation as fierce fighters, using tactics learned through many decades of conflicts with the Creeks. John Gill Shorter, who returned to Eufaula after being wounded early in the war, served as of Alabama during the Civil War.

Following the defeat and fall of Montgomery, the state capital, to Union troops, Eufaulians could only wait for the worst. On , , a messenger galloped in with news that General Benjamin H. Grierson, Commanding General of over 4,000 Union cavalrymen, was approaching from , to the west. Under a flag of truce, Eufaula's mayor, Doctor C. J. Pope, and other prominent citizens met General Grierson beyond College Hill with news that General had already surrendered to General at the and that the Civil War was over. The Union troops marched peacefully across the river to camp in as Doctor Pope rushed back with barely enough time to disband the local militias to avoid conflict. Dr. and Mrs. Pope entertained the general and his staff at dinner. Thanks to the efforts of Dr. Pope, Eufaula remained intact, her citizens unharmed.

After the Civil War, the town's fortunes suffered from the restrictive and the loss of plantation-produced cotton. However, by the early 1900s, Eufaula was booming again with cotton mills and railways. In 1963, the created (unofficially named Lake Eufaula) behind the lock and dam of , once again assuring Eufaula's importance as an .

In 1964, the was established along Lake to serve and protect many endangered and threatened species such as the American , the , the and the . The refuge is a major attraction for visitors from around the country.

Historic buildings include the and the . There are 667 in the .

There were 5,447 households out of which 35.0% had children under the age of 18 living with them, 47.4% were married couples living together, 20.2% had a female householder with no husband present, and 28.8% were non-families. 26.5% of all households were made up of individuals and 11.5% had someone living alone who was 65 years of age or older. The average household size was 2.51 and the average family size was 3.02.

* Eufaula is a "Certified Audubon Sustainable Community"; certified by .
* is known as the "Bass Fishing Capital of the World." [cite web |work=Outdoor Alabama |url=http://www.outdooralabama.com/fishing/freshwater/where/reservoirs/eufaula/ |title=Fish and Fishing in Lake Eufaula]
* Its sister city, , also has a lake called Lake Eufaula.

Children of the city

* (born July 18, 1941) was the lead singer of the American group
* (born October 17, 1951) is a former Alabama Public Service Commissioner, State Treasurer and the son of Governors George and .
* (born January 11, 1930) mother of
* (born Katherine Esther Scruse on May 4, 1930) the mother of music superstars and was born in the same county as Eufaula.
* Admiral , USN (Ret.), (born February 9, 1912) was the Chief of Naval Operations and Chairman of the Joint Chiefs of Staff
* E. J. Junior III, an all-SEC linebacker for the intercollegiate football team under coach