Michael Kay (born February 2, 1961) is the television play-by-play broadcaster of the New York Yankees, host of Centerstage on the YES Network, and the host of The Michael Kay Show heard on WEPN, WLIR-FM, WNJE, and XM141.[1]

As a native of The Bronx, and a nephew of actor Danny Aiello,[2] Kay began reporting as a youth at the Bronx High School of Science and then at Fordham University for WFUV. Receiving a Bachelor of Arts in communications from Fordham University,[1] Kaye is part of a successful line of WFUV alumni sportscasters including Vin Scully, Sal Marchiano, Bob Papa, Mike Breen, Chris Carrino, Jack Curry, Spero Dedes, Gary Stanley, Ed Randall, and Tony Reali.

Kay started his professional career as a New York sports reporter writing for the New York Post in 1982 as a general assignment writer, with specific assignments to college basketball, the New Jersey Nets, the NBA coming over time. He received the Yankees assignment in 1987.[1] In 1989, Kay left the Post for the New York Daily News, still primarily working on the Yankees. At this time, Kay also served as the Madison Square Garden Network Yankee reporter starting in 1989.[1] From 1992 to 1999, he also served as MSG's locker room reporter for the New York Knicks.[1] He had previously worked for the network as a contributor on the news-format sports show SportsNight.[1] Kay left the Daily News to host a sports talk show on WABC in 1992, briefly returning to write "Kay's Korner" for the News in 1993, before taking the microphone job for radio broadcasts New York Yankee games beside John Sterling.[1] In 2008, he served as a play-by-play for ESPN Radio during the 2008 NLDS.

Announcer for the New York Yankees 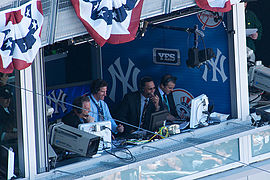 Kay spent a decade partnered with John Sterling as the radio announcers of the team on WABC-AM.[3] Kay and Sterling also paired together in 1998 for Sports Talk with John Sterling and Michael Kay, a nightly radio show which aired on WABC.[4] During the baseball season, the duo hosted Yankee Talk, a weekend pre-game radio show. From 1992 to 1993 Kay hosted his own show on WABC. Kay continued during that time as a spot reporter on ABC radio, doing off-season shows with Sterling and as a fill-in sports reporter for Channel 7 Eyewitness News New York. When ESPN launched an AM station, Kay moved downtown to 2 Penn Plaza to host a radio show on ESPN's WEPN. (See below)

On radio and TV, Kay has been best known for yelling "See-ya!" during his home run calls (no matter the team, though his enthusiasm is at its obvious highest when a Yankee hits the home run) and noting the time of the game during the recap, often using the word 'unmanageable' if the game was longer than 3 hours. (After Joe West was critical of the length of Yankee-Red Sox games, Kay often says that "Joe West isn't happy" when a game lasts longer than three hours.) As a radio broadcaster one of Kay's best known trademarks was describing the uniforms of the Yankees and their opponent, this description typically ended with him describing the back of the Yankees' jersey as having "no name, of course."

When WCBS-AM acquired the radio rights to the Yankees broadcasts in 2002, Kay moved to the debuting YES Network on television and Sterling remained on the radio. Kay has been the Yankees' lead television play-by-play announcer since this time.[1]

Kay has worked with a series of partners on YES, often with three or four different partners in the same season. Most have been former professional players, including Ken Singleton, David Cone, Al Leiter, Paul O'Neill, Jim Kaat, John Flaherty, current Yankee manager Joe Girardi and the late Bobby Murcer.

In 2008 MLB invited Kay to call the Home Run Derby at Yankee Stadium during that year's All Star festivities.

Since the late 1990s, Kay and Sterling have co-emceed the Yankees' annual Old-Timers' Day ceremony[5] (following in the tradition of the late Mel Allen and Frank Messer), players' number retirements, and the City Hall celebrations after Yankees' World Series victories.

On September 21, 2008, Kay joined Jon Miller and Joe Morgan to call the seventh inning of ESPN's broadcast of the final home game at Yankee Stadium against the Baltimore Orioles. According to Miller, Kay was brought in because ESPN felt that they should include the local aspects of broadcasting for the Yankees for this special game, as the YES Network was not allowed to cover the game.

Kay was selected to call one of the 2008 National League Division Series for ESPN Radio.

In 2009, he began hosting a drive-time talk show on 1050 ESPN Radio. He also hosts the YES Network's CenterStage, a sports and entertainment interview-format show.

During baseball season, Kay frequently broadcasts live from the vicinity of the stadium that the Yankees are playing in that evening. (Contractual exclusivity prohibits him from hosting the show from inside Yankee Stadium.) Since 2009, the 6:00 hour has been co-titled "New York Baseball Tonight" throughout the baseball season. Kay does not usually appear during that hour if he is broadcasting a Yankee game that evening. Don LaGreca often hosts this segment and appears with Kay on the rest of The Michael Kay Show.

When Kay is on the air for the end of his program, he usually signs off with the following: "In the words of Billy Joel, Life is a series of hellos and goodbyes, I'm afraid it's time for good-bye again," before promoting the following program.

Kay was also awarded the Dick Young Award for Excellence in Sports Media by the New York Pro Baseball Scouts in 1995 and the award for Best Sports Reporter at the 2000 New York Metro Achievement in Radio Awards.