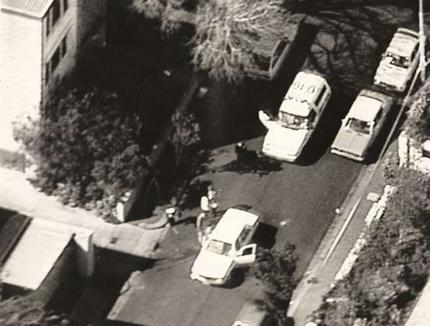 The Walsh Street police shootings was the 1988 of two officers, Constable Steven Tynan, 22 and Probationary Constable Damian Eyre, 20. The officers were responding to a report of an abandoned car when they were gunned down at 4.30am in Walsh Street, , on

Four men, , Trevor Pettingill, Anthony Leigh Farrell and Peter David McEvoy were charged with murder and later acquitted by the . Two other suspects, Jedd Houghton and Gary Abdallah were shot and killed by Victoria Police before being brought to trial

In 2005, Wendy Peirce, of accused Victor Peirce, gave an interview to media detailing how her late husband had planned and carried out the murders and was actually guilty as charged

On , , Peirce's best friend, Graeme Jensen was shot and killed by police in

Report of an abandoned car

On October 12, thirteen hours later at approximately 4:50am, Constables Tynan and Eyre were operating a divisional van from Prahran police station when called to an abandoned left in Walsh Street, South Yarra. While the officers were examining the vehicle, they were ambushed by armed offenders. Constable Tynan was cut down with a shotgun while sitting in the car, and Constable Eyre was seriously wounded. Constable Eyre, despite suffering serious injuries, struggled with the attacker until another person approached him from behind and managed to remove Eyre's service revolver from its holster and shot him in the head with it Fact|date=May 2008.

Police believe members of a Melbourne underworld gang had organised the murders. In the two-year period up to April 1989 there were eleven fatal shootings by police. The execution-style killings of the two police officers was thought by many to have been a payback by prominent members of the Melbourne underworld Fact|date=May 2008.

The police investigation was known as the Ty-Eyre Task Force, a combination of the two surnames of the officers killed. It was headed by John Noonan and was the biggest investigation had ever undertaken at the time and also the longest running, spanning 895 days. At the height of the investigation, police had hundreds of officers assigned to the task force to investigate the murders, and diverted resources from other major investigations at the time Fact|date=May 2008.

Police investigations revealed the shotgun used to perform the murders was the same weapon used earlier in a bungled attempt to blast open a bank door during a robbery at the State Bank in Oak Park seven months earlier.

A gang police dubbed The Flemington Crew had robbed at least four Melbourne banks. The robbers bungled the Oak Park robbery and left at the scene. The shells became the single forensic link police had, linking the shells to the same shotgun used in the Walsh Street murders Fact|date=May 2008.

Members of the gang responsible for the robberies were believed to be , Graeme Jensen, Jedd Houghton and Peter David McEvoy. The home of Victor Peirce was raided the day following the Walsh Street shootings. Peirce's house was demolished and the backyard dug up in the search for evidence.

Jason Ryan became a prosecution witness in the trial and was offered immunity in exchange for his testimony. Police placed Ryan under the and removed him to Mansfield on , for questioning, with his evidence changing many times over the course of time between the shootings and the trial Fact|date=May 2008.

All 4 men charged with the murders were acquitted in the .

Victor Peirce and Peter David McEvoy were taken into custody on other charges, yelling "We'll be killed, we'll be killed". Victor claimed after his acquittal that he was afraid of police retribution and issued a statement in which he professed his innocence and requested "to be left alone to work and prove to the community I am not as bad as police and the press has made me out to be." Fact|date=May 2008