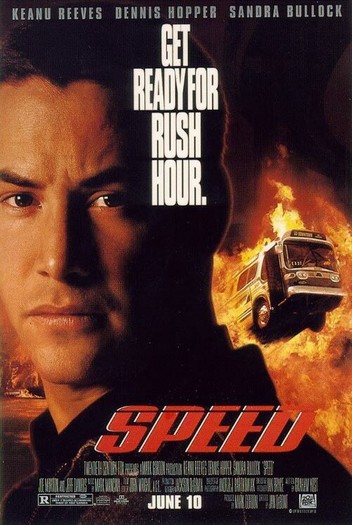 "Speed" is a 1994 American action/thriller directed by set in . It focuses on police officer Jack Traven who tries to arrest an insane /. After the bomber escapes, he sets up a on a city bus which Traven boards and must keep moving above convert|50|mph|km/h|0 or the bomb will explode. The film stars , , , and .

Jack Traven () and his veteran partner Harry Temple () are explosives experts in . A retired Bomb Squad specialist, Howard Payne (), is holding a group of office workers trapped in an elevator for ransom. Jack and Harry manage to rescue the hostages before Payne sends the elevator plummeting to the basement. They find Payne in a freight elevator. After a brief standoff, with Payne holding Harry hostage, Payne escapes and sets off a small explosion that knocks Jack unconscious and appears to kill Payne. Jack and Harry are then commended for their bravery by the LAPD in an official ceremony.

Later, as Jack heads to work, a city bus explodes in front of him, killing the driver. Payne calls Jack on a nearby pay phone, revealing he is alive and that he has rigged another bus to explode. The bomb will arm itself when the bus reaches 50 and will detonate if the bus goes below that speed. In addition, Payne will detonate the bus manually if anyone gets off the bus, or if the ransom is not delivered on time. Jack locates the bus and jumps aboard, but the bomb has already been armed.When Jack identifies himself as a police officer in an attempt to calm the passengers, one man draws a gun, believing Jack has come to arrest him. He accidentally shoots the driver as he struggles to escape. Another passenger, Annie Porter (), takes the wheel. Annie is left to drive the bus throughout the city while keeping it at the necessary speed and avoiding other cars. Jack is in contact with his SWAT team Lieutenant "Mac" McMahon (), who arranges an escort and directs them around the city from the air to try and get them away from traffic. News of the bomb on the bus quickly makes the TV broadcasts and soon there is a long line of police cars and news choppers trailing the bus, which is on an unopened freeway. During the ride, the wounded bus driver is allowed by Payne to be evacuated off the bus but a scared passenger named Helen tries to get off as well. Payne detonates a smaller bomb under the exit, and Helen is crushed beneath the bus wheels.

The bus comes to a convert|50|ft|abbr=on gap in the freeway and must jump it, after which they are able to go to the so they can safely maintain their speed by driving in circles on a runway while the news choppers are unable to observe the action in the restricted airspace. Jack goes under the bus to try to defuse the bomb, but ruptures the instead. Meanwhile, Harry leads a SWAT team on a raid at Payne's residence. However, his residence is rigged with a bomb that kills Harry and his team.

Meanwhile, Jack notices that Payne has a video link on the bus that lets him see everything happening. Using a news van, he is able to find the feed and record it. The news team loops the footage being transmitted to Payne while the passengers are safely evacuated. Jack rigs the bus to keep going in circles so it doesn't explode so he and Annie can get off by riding on the bus' floor panel. Payne is about to detonate the bomb when he notices that the feed is being looped. To his outrage, Payne quickly realizes that everyone has gotten off the bus safely.

Payne, in his old uniform, kidnaps Annie as he comes to collect the ransom, then escapes into the subway. Jack pursues him and they fight on top of a , which is damaged during the fight. In the end, Jack pushes Payne's head into a tunnel light, decapitating him. Jack and Annie still can't get off the subway, which derails and crashes through the ground and lands on . Jack and Annie survive, and kiss as shocked pedestrians look on.

Many of the freeway scenes in the movie were filmed on California's Interstate 105 and Interstate 110, which was not officially open at the time of filming. The jump was filmed on the fifth-level HOV lane ramp of the massive . Filming of the final scenes occurred at Mojave Spaceport, which doubled for . The shots of the LACMTA Metro Red Line through the construction zone were shot using an 1/8th scale model of the Metro Red Line, except for the jump when it derailed.

Twelve GM New Look buses were used in the filming of the movie. Two of them were blown up, one was used for the high-speed scenes, one had the front cut off for inside shots, and one was used solely for the "under bus" shots. Another bus was used for the bus jump scene, which was done in one take.

In the scene where the bus must jump across a gap in an uncompleted elevated freeway-to-freeway ramp while still under construction, a ramp was used to give the bus the necessary lift off so that it could jump the full fifty feet. The bus used in the jump was empty and the driver wore a shock-absorbing harness so he could handle the jolt on landing. The highway section the bus jumped over was a regular highway, with the gap added in the editing process using CGI.In a commentary track on the region 1 DVD director Jan de Bont reports that the bus jump stunt did not go as planned. To do the jump the bus had everything possible removed to make it lighter. On the first try the stunt driver missed the ramp and crashed the bus making it unusable. This failure was not reported to the studio at the time. A second bus was prepared and two days later a second attempt was successful. But, again, things did not go as intended. Advised that the bus would only go about 20 feet the director placed one of his multiple cameras in a position that was supposed to capture the bus landing. However, the bus traveled much further airborne than anyone had thought possible. It crashed down on top of the camera and destroyed it. Luckily, another camera placed about 90 feet from the jump ramp recorded the event.

A soundtrack album featuring "songs from and inspired by" the film was released with the following tracks:

"Speed: Songs From And Inspired By The Motion Picture"

In addition to the above release, a separate album featuring 40 minutes of Mark Mancina's score from the film was released.

The movie was a critical and a commercial success. reported that 93% of critics gave the film positive reviews. "Speed" debuted at #1 grossing $14,456,194 on its opening weekend. It went on to gross $121,248,145 in the U.S. and $350,448,145 worldwide. In 1995, it won two s for Best Sound and Best Sound Effects Editing. The film was also nominated for the Academy Award for Best Film Editing. [ [http://awardsdatabase.oscars.org/ampas_awards/BasicSearch?action=searchLink&displayType=3&BSFilmID=38219 Academy Awards Database: Speed] ; accessed on October 4, 2006]

In 1997, a sequel "", was released. Set on a cruise ship, it features returning to reprise her role, as the new villain, and as the new protagonist and love interest.