Digg is a social news website. Prior to Digg v4, its cornerstone function consisted of letting people vote stories up or down, called digging and burying, respectively. Digg's popularity prompted the creation of copycat social networking sites with story submission and voting systems.[6] The website traffic ranked 143rd, behind its long-time competitor Reddit, by Alexa.com as of June 11, 2011.[5] Quantcast estimates Digg's monthly U.S. unique visits at 7.2 million.[7] 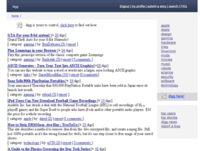 Digg started out as an experiment in November 2004 by Kevin Rose, Owen Byrne, Ron Gorodetzky, and Jay Adelson. The original design was free of advertisements, and was designed by Dan Ries. As Digg became more popular, Google AdSense was added to the website. In July 2005, the site was updated to Version 2.0. The new version featured a friends list, the ability to "digg" a story without being redirected to a success page, and a new interface designed by web design company silverorange.[8] The site developers have stated that in future versions a more minimalist design will likely be employed. On Monday June 26, 2006 version 3 of Digg was released with specific categories for Technology, Science, World & Business, Videos, Entertainment and Gaming as well as a View All section where all categories are merged. Digg has grown large enough that submissions sometimes create a sudden increase of traffic to the "dugg" website. This is referred to by some Digg users as the "Digg effect" and by some others as the site being "dugg to death." However, in many cases stories are linked simultaneously on several popular bookmarking sites. In such cases, the impact of the "digg effect" is difficult to isolate and assess. On August 27, 2007, Digg altered its main interface, mostly in the profile area. The domain "digg.com" attracted at least 236 million visitors annually by 2008 according to a Compete.com survey.[9]

Digg CEO Jay Adelson explained at the 2010 "Bigg Digg Shindigg," which is part of the South by Southwest Interactive Conference, that Digg is getting a major overhaul and redesign.[10] In an interview with Wired magazine, Adelson explained that "Every single thing has changed" and that "the entire website has been rewritten."[11] Adelson explains that the new Digg will essentially eliminate the duplication problem. It will also help prevent so called 'power users' from dominating the site with their submissions. The new Digg will also offer users a personalized homepage, based on their diggs, that is tailored to their specific interests. The commenting system will be updated to "help fight bad behavior like trolling or group-burying." The entire look of the site will also change. Adelson summed up the new Digg by saying, "We've got a new backend, a new infrastructure layer, a new services layer, new machines — everything." John Quinn wrote in a Digg blog post that the company was going to stop using MySQL and begin using Cassandra, a distributed database system.[12]

On April 5, 2010, Kevin Rose announced that he would be assuming the position of CEO as Jay Adelson had stepped down.[13] Although, some time later he has disclosed that he is actively seeking a replacement CEO as the role takes up too much of his time that he would rather spend doing other things, such as angel investing.

On August 25, 2010, Digg released v4. The site experienced a number of bugs and glitches that has resulted in a backlash from Digg users in the form of verbal opposition and, initially, heavy posting of articles from Reddit - a competitor of Digg's. Digg's business development director Matt Van Horn left Digg after the official update of version 4.[14]

Several reports have come forward claiming Digg has been trying to sell itself to a larger company since early 2006.[15] While Adelson claims that Digg will meet with any potential buyers, he denies that they will actively begin talks for a sale. The most recent sale talks were with Google in July 2008 for approximately $200 million. On July 25, during the due diligence part of the potential sale, Google informed Digg that they were not interested in the purchase.[16] As a result of Google's decision, Digg entered into a third round of funding, receiving $28.7 million from investors such as Highland Capital Partners.[17] With this funding, the company plans to move from their current offices to accommodate a bigger staff base.[18] On December 2, 2008, BusinessWeek reported "Digg Chief Executive Officer Jay Adelson says the popular news aggregation Web site is no longer for sale, and the focus of the company is to build an independent business that reaches profitability as quickly as possible. That means the four-year-old startup will dial back some of its expansion plans, instead prioritizing projects that generate revenue and profit."[19] On December 18, 2008, BusinessWeek analyzed Digg's financial statements. They reported that Digg lost $4 million on $6.4 million of revenue in the first three quarters of 2008.[4]

Digg Dialogg allows Digg users to submit questions to a preselected famous individual who agrees to do an interview with a reporter chosen by Digg.[22]

On April 2, 2009, Digg released the Digg Bar, which provides a toolbar above the top of a site allowing the user to produce shortened urls, or access digg comments and analytics without leaving the page.[23] On April 5, 2010, Kevin Rose announced on the official Digg blog that the controversial DiggBar would be eliminated with the implementation of the 4th version of the website.[24] This was Rose's first major announcement since succeeding Jay Adelson as CEO.

On April 19, 2007, Digg opened their API[25] (Application Programing Interface) to the public.[26] This allowed software developers to write tools and applications based on queries of Digg's public data, dating back to 2004. Since then, many blogs[27][28] have sought to keep up with all of the ongoing Digg API projects.

Unlike the present Digg algorithm, which works on user diversity, in 2006 it was much more dependent on flocking behavior among users to determine the promotion of content. During this period an anonymous user posted a blog accusing an O'Reilly writer of stealing Digg's CSS.[29] The Digg mob flocked to the story and it was promoted with nearly 3,000 votes. Digg founders Kevin Rose, Jay Adelson and Daniel Burka expressed dissatisfaction on finding Digg's code on Mallett's sites.[30] Mallett responded and clarified that the theft of code was committed by the contributors to the open source Digg clone, Pligg, which he was using.[31] Kevin acknowledged the misunderstanding and notified Pligg developers of the issue.[32] Adelson contacted Mallett thanking him for clearing the issue and expressed support for his claims. Another O'Reilly blogger in defense of Mallett posted a criticism of Digg's mob mentality.[33] Digg mob's failure to the Mallett story has also been attributed to 'groupthink' which is different from the wisdom of the crowds which requires independence among the nodes.[34]

The purpose of Digg was to give editorial powers back to the masses. However, the second version of Digg began using a secret algorithm that blurs the transparency that was expected by the users. In 2006, the site began to be gamed by their top users.[35] Supernova17 was banned after agreeing to promote a story for cash to an undercover Digg sting operation.[36] Another group of users openly formed a niche 'bury brigade' .[37] The users defended themselves claiming their actions were in accordance with the wishes of Digg users. Digg tried to offset criticism by hiring computer scientist Anton Kast to develop a diversity algorithm to prevent special interest groups from dominating Digg. A townhall was organized and the users demanded the shouts feature be discontinued.[38] By 2008, Google increased their page rank for Digg and many 'pay for Diggs' startups were created to profit from the opportunity. According to a popular blog a single front-page story was sold for $500 at that time.[39] Usocial and Diggfront were given cease and desist notices from Digg which they ignored. After the release of Digg v4, there had been more questions with the algorithm.[40]

On May 1, 2007, an article appeared on Digg's homepage that contained the encryption key for the AACS digital rights management protection of HD DVD and Blu-ray Disc. Then Digg, "acting on the advice of its lawyers," removed posting submissions about the secret number from its database and banned several users for submitting it. The removals were seen by many Digg users as a capitulation to corporate interests and an assault on free speech.[41] A statement by Jay Adelson attributed the article's take-down to an attempt to comply with cease and desist letters from the Advanced Access Content System consortium and cited Digg's Terms of Use as justification for taking down the article.[42] Although some users defended Digg's actions,[43][44][45] as a whole the community staged a widespread revolt with numerous articles and comments being made using the encryption key.[46][47] The scope of the user response was so great that one of the Digg users referred to it as a "digital Boston Tea Party".[48] The response was also directly responsible for Digg reversing the policy and stating: "But now, after seeing hundreds of stories and reading thousands of comments, you've made it clear. You'd rather see Digg go down fighting than bow down to a bigger company. We hear you, and effective immediately we won't delete stories or comments containing the code and will deal with whatever the consequences might be."[49]

On August 5, 2010, "progressive" blogger Ole Ole Olson (aka "Novenator") posted a report to AlterNet about a year-long effort of organized burying of seemingly liberal articles from the Upcoming module of Digg by a conservative Yahoo! Groups mailing list known as DiggPatriots and an associated page on coRank; he also accused leading members of the mailing list of participating in behavior which violated the Digg Terms of Usage, such as creating "sleeper" accounts in the event of administrators banning their main accounts for terms-violating behavior as well as vexatious "reporting" of seemingly liberal users for banning.[50][51] The post was immediately followed by the disbanding and closure of the DiggPatriots list, and an investigation into the matter by Digg.[52]

On August 25, 2010, when Digg updated to version 4, the site was unreachable or unstable during the launch day and the weeks following. A large number of the site's members have complained about the new design and removed features (such as bury, favorites, friends submissions, upcoming pages, subcategories, and history search).[53] Kevin Rose replied to complaints on his blog where he promised to restore upcoming pages and fix the algorithm.[54]

this new version of digg reeks of VC meddling. It's cobbling together features from more popular sites and departing from the core of digg, which was to "give the power back to the people."[55]

Ian Eure, former Digg engineer, explained on his blog why the update cannot be reverted, but the old features can still be ported to the new architecture.[56]

Digg's traffic dropped significantly after the launch of version 4,[61] and publishers reported a drop in direct referrals from stories on Digg's front page.[62] Recently hired CEO Matt Williams attempted to address some of the users' concerns in a blog post on October 12, 2010, promising to reinstate many of the features that had been removed. Digg banned RSS Submissions. Digg said "The simple act of forcing a manual submission helps to combat spam and ensures that quality content appears on Digg."[63][64]