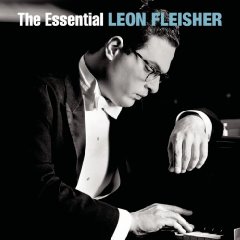 Leon Fleisher (born , ) is an American pianist and conductor.

He was born in , , where he started studying the piano at age 4. He made his public debut at age 8 and played with the under at 16. He studied with .

He made a memorable series of recordings with and the before losing the use of his right hand due to . He continued performing the left-handed repertoire until he quite recently regained the use of his right hand through a combination of and injections. He also undertook conducting during this time, serving at one time as Music Director of the Symphony Orchestra in . He is particularly well-known for his interpretations of the piano concerti of Brahms and Beethoven. In 2004, Vanguard Classics released Leon Fleisher's first "two-handed" recording in over 40 years, entitled "Two Hands," to critical acclaim. "Two Hands" is also the title of a short documentary on Fleisher by which was nominated for an for best short subject on January 23, 2007. Fleisher received the 2007 Kennedy Center Honors. Kennedy Center Chairman Stephen A. Schwarzman described him as "a consummate musician whose career is a moving testament to the life-affirming power of art."

Fleisher's musical interests extend beyond the central German Romantic repertory. The American composer composed his Concerto for Two Pianos, Left Hand for Fleisher and his close friend , who has also suffered from debilitating problems with his right hand. It received its first performance in Baltimore in April 1996. The concerto is constructed in such a way that it can be performed in one of three ways, with either piano part alone with reduced orchestra, or with both piano parts and the two reduced orchestras combined into a full orchestra.

He has continued to be involved in music, both conducting and teaching at the , the , and the in Toronto; he is also closely associated with the Tanglewood Music Center. As a teacher, Fleisher has carried on a tradition that descends directly from Beethoven himself, handed down generationally through , , , Fleisher himself, and then to hundreds of Fleisher's own piano students over nearly half a century. His influence on classical pianists of the current day, especially in North America, is enormous. Today his students are among piano faculty members at major music schools. Also among his students are such renowned concert pianists as , , , , , , , , , , , , and .

Honorary doctorates from the San Francisco Conservatory of Music, Towson State University, The Boston Conservatory, and the Cleveland Institute of Music

* [http://www.cello.org/heaven/disabled/fleish.htm On his disability and claimed holistic cure]