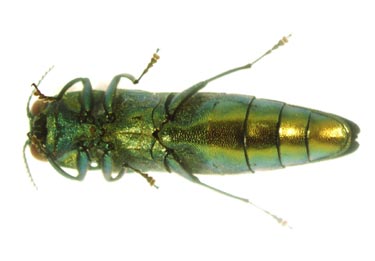 image_width = 240px
regnum = ia
phylum = a
classis = a
ordo = Coleoptera
familia =
genus = ""
species = "A. planipennis"
binomial = "Agrilus planipennis"
binomial_authority = Fairmaire, 1888The emerald ash borer ("Agrilus planipennis" or "Agrilus marcopoli") is a shiny green native to Asia. Since its accidental introduction into the United States, it has spread to seven states and adjacent parts of Canada and is considered an . It has killed at least 25 million s so far and threatens to decimate the ash trees throughout North America. [ [http://www.emeraldashborer.info/ EmeraldAshBorer.info] ]

The average length for an adult emerald ash borer is ¾ in (20 mm) long and frac|1|6 in (4 mm) wide. The larvae are approximately 1 mm in diameter and .6 in (15 mm) long, and are a creamy white color. The eggs turn to a yellow brown color prior to hatching.

The natural range of the emerald ash borer is eastern , northern , , and . It was suspected to be accidentally imported to from China in the 1990s and has since destroyed more than six million s in southeastern . It was discovered in June 2002 in . It has since been found in a few other parts of the United States and . and have experienced emerald ash borer migration from Michigan, while and received shipments of contaminated trees from a Michigan nursery. The emerald ash borer was confirmed in in April 2004 and in October 2007.

The U.S. Department of Agriculture is attempting to exterminate all of these beetles on the continent, and has taken the unusual measure of destroying every ash tree within a half-mile (800 m) radius of known infested trees. is a zone from which ash trees or even firewood cannot be removed. The quarantine applies only to the counties where the emerald ash borer has been detected. The infected states have prohibited the movement of firewood from one state to another helping to eliminate the spreading and fully enforce the quarantine zone. Large fines have been imposed on a few companies that violated the ban, including one that was removing ash trees from southeast Michigan and is believed to be responsible for spreading the beetle to another county. The USDA has committed at least $40 million dollars for eradication in 2004 and expects to spend over $350 million in the next twelve years.

Michigan officials announced that ash borer infestation had crossed the and was now in the for the first time. environmental officials considered it a grave threat and began preparations for surveys in northern counties. Currently twelve counties in are under quarantine. However, states and cities are running out of money to combat the problem and many authorities feel that the borer will spread throughout North America. The EAB can move short distances by flying as well as surviving long distances in transit on Ash tree nursery stock, Ash logs, branches, and firewood. [Emerald Ash Borer Confirmed in Illinois. Illinois Dept. of Agriculture. June 13, 2006. [http://www.agr.state.il.us/newsrels/r0613061.html] ]

In June 2006, it was reported that emerald ash borers had been found at a home near . [cite news |url=http://abcnews.go.com/Technology/wireStory?id=2073348 |publisher= |title=Bug that kills ash trees found in Illinois |date= |author=Jim Paul] Illinois officials plan to conduct a survey of the region, and will later hold a hearing to determine if a quarantine is necessary. In July, 2006, further infestations were discovered in Northern , including Wilmette, Evanston, and Winnetka. [cite web |url=http://www.agr.state.il.us/newsrels/r0721061.html |publisher= |date= |title=Emerald ash borer discovered in Evanston]

In June 2007, it was reported that emerald ash borers have been found in Cranberry Township, a suburb of . [cite news |url=http://www.pittsburghlive.com/x/pittsburghtrib/news/cityregion/s_514585.html |publisher=Pittsburgh Tribune-Review |title=Destructive Asian insect found in Cranberry |date= |author=Allison M. Heinrichs] On , , The Pittsburgh Post Gazette reported that the state Department of Agriculture says the emerald ash borer has been found in Mercer County. The invasive beetle was discovered in Butler and Allegheny counties last summer. Officials are surveying this year to gauge whether the insect has spread. Mercer joins Allegheny, Beaver, Butler and Lawrence counties in a quarantine prohibiting the movement of ash nursery stocks, green lumber and firewood.

In October 2007, an emerald ash borer was discovered in a Department of Agriculture "detection tree" located in Fayette County. This detection tree was located in a recreational site, with camping, mountain biking, and white water rafting. It is believed that the pest arrived in firewood that was illegally transported by tourists visiting the Gorge area, a popular site for white water rafting (USDA-APHIS-PPQ). [cite news |url=http://sundaygazettemail.com/section/News/2007101928 |publisher=Charleston Gazette-Mail (Sunday Edition) |title=Emerald ash borers invade Mountain State |date= |author=Rick Steelhammer]

As of December 2007, a federal quarantine has been imposed on the following areas in the U. S. for Emerald Ash Borer: the lower peninsula of Michigan; Mackinac County, Michigan; the entire states of Ohio, Illinois, and Indiana; Prince Georges County, Maryland; and Fayette County, West Virginia. (USDA-APHIS)

Emerald Ash Borer has also been found in Canada. As of November 2007, there are four regulated areas in Southwestern Ontario for EAB. Elgin, Lambton, and Middlesex counties are regulated separately. Essex County and the Municipality of Chatham-Kent, which were separately regulated in 2004, were combined into one regulated area in June 2006. (CFIA/USDA-APHIS-PPQ)

On Tuesday, July 29th, 2008, it was announced that the Missouri department of agriculture has detected the emerald ash borer in the state. On Monday, August 4th, Wisconsin confirmed that the first appearance in the state was detected in the village of , in . [cite web|url = http://www.startribune.com/nation/26263649.html|publisher = Minneapolis Star-Tribune|title = Wisconsin confirms the arrival of ash borer, putting trees at risk|date = ]

Authorities across the US are now trying to determine the exact extent of EAB by placing purple traps nationwide.

The beetle kills trees because the feeding larvae damage both the phloem (responsible for nutrient transport throughout the tree) and xylem (responsible for take-up of water and nutrients) tissues of the tree. The beetle effectively strangles the tree. A tell-tale sign of infestation is new shoots sprouting from the bottom of the tree. As long as the beetle does not eat the bark at the very base of the tree, the small shoots at the bottom can still get nutrients. Surprisingly, even after the larger tree is cut down, some of these shoots may keep on growing.

The insect is unusually difficult to kill. More than 7.5 billion ash trees are currently at risk. Nearly 114 million board feet (33,000 m³) of ash saw timber with a value of US$25.1 billion is grown in the eastern United States each year. Over thirty five million ash trees have died or are dying in the United States at this time. The full time it takes for a tree to die due to the EAB is generally two or three years.

A pilot study is being undertaken in Michigan to determine if three different parasitic wasps can deter the emerald ash borer. These tiny stingless wasps can sense beetles underneath the bark and then lay their eggs in the larvae or egg, thus killing them. It is not known at this time whether their release will have any unintended ecological impacts.The wasps have been released according to a Michigan newspaper. The releases began in July 2007, a few weeks later than they had hoped. [cite news |url=http://www.freep.com/apps/pbcs.dll/article?AID=/20070624/NEWS05/706240667/1001/NEWS |publisher=Detroit Free Press |title=Debate buzzes on wasp plan |date= |author=Tina Lam] (modification: USDA-APHIS-PPQ)

*Purchase firewood AT/near a campsite
*Do not bring firewood back to destination after a camping trip
*Evaluate firewood. Make sure it has no bark at all
*Decrease the use of wood burning fires [http://www.dnr.wi.gov/org/land/Forestry/FH/Ash/eab-cando.htm]
*Treat already infested trees or prevent future infestation [http://www.emeraldashborer.info/files/E2955.pdf]