The IP Multimedia Subsystem or IP Multimedia Core Network Subsystem (IMS) is an architectural framework for delivering Internet Protocol (IP) multimedia services. It was originally designed by the wireless standards body 3rd Generation Partnership Project (3GPP), as a part of the vision for evolving mobile networks beyond GSM. Its original formulation (3GPP Rel-5) represented an approach to delivering "Internet services" over GPRS. This vision was later updated by 3GPP, 3GPP2 and ETSI TISPAN by requiring support of networks other than GPRS, such as Wireless LAN, CDMA2000 and fixed line.

To ease the integration with the Internet, IMS uses IETF protocols wherever possible, e.g. Session Initiation Protocol (SIP). According to the 3GPP,[1] IMS is not intended to standardize applications but rather to aid the access of multimedia and voice applications from wireless and wireline terminals, i.e. create a form of fixed-mobile convergence (FMC). This is done by having a horizontal control layer that isolates the access network from the service layer. From a logical architecture perspective, services need not have their own control functions, as the control layer is a common horizontal layer. However in implementation this does not necessarily map into greater reduced cost and complexity.

Alternative and overlapping technologies for access and provisioning of services across wired and wireless networks include combinations of Generic Access Network, soft switches and "naked" SIP.

Since it is becoming increasingly easier to access content and contacts using mechanisms outside the control of traditional wireless/fixed operators, the interest of IMS is being challenged.[2]

An example of a global standard based on IMS is MMTel. 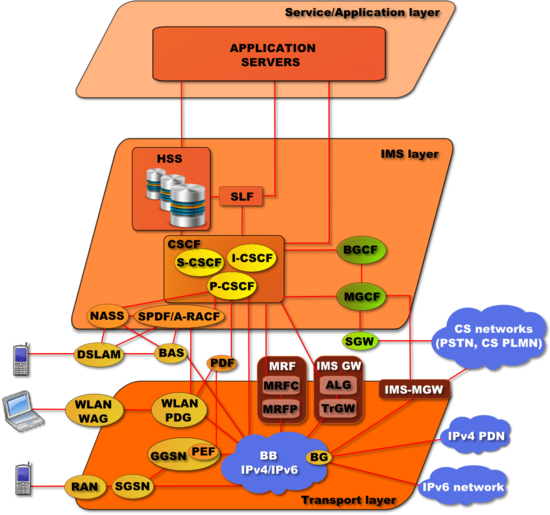 Each of the functions in the diagram is explained below.

The IP multimedia core network subsystem is a collection of different functions, linked by standardized interfaces, which grouped form one IMS administrative network. A function is not a node (hardware box): an implementer is free to combine two functions in one node, or to split a single function into two or more nodes. Each node can also be present multiple times in a single network, for dimensioning, load balancing or organizational issues.

The user can connect to IMS in various ways, most of which use the standard Internet Protocol (IP). IMS terminals (such as mobile phones, personal digital assistants (PDAs) and computers) can register directly on IMS, even when they are roaming in another network or country (the visited network). The only requirement is that they can use IP and run Session Initiation Protocol (SIP) user agents. Fixed access (e.g., Digital Subscriber Line (DSL), cable modems, Ethernet), mobile access (e.g. W-CDMA, CDMA2000, GSM, GPRS) and wireless access (e.g. WLAN, WiMAX) are all supported. Other phone systems like plain old telephone service (POTS—the old analogue telephones), H.323 and non IMS-compatible VoIP systems, are supported through gateways.

The Home Subscriber Server (HSS), or User Profile Server Function (UPSF), is a master user database that supports the IMS network entities that actually handle calls. It contains the subscription-related information (subscriber profiles), performs authentication and authorization of the user, and can provide information about the subscriber's location and IP information. It is similar to the GSM Home Location Register (HLR) and Authentication Centre (AuC).

A Subscriber Location Function (SLF) is needed to map user addresses when multiple HSSs are used.

Various identities may be associated with IMS: IP Multimedia Private Identity (IMPI), IP Multimedia Public Identity (IMPU), Globally Routable User Agent URI (GRUU), Wildcarded Public User Identity. Both IMPI and IMPU are not phone numbers or other series of digits, but Uniform Resource Identifier (URIs), that can be digits (a Tel URI, like tel:+1-555-123-4567) or alphanumeric identifiers (a SIP URI, like sip:john.doe@example.com" ).

The IP Multimedia Private Identity (IMPI) is a unique permanently allocated global identity assigned by the home network operator, and is used, for example, for Registration, Authorization, Administration, and Accounting purposes. Every IMS user shall have one or more IMPI.

The IP Multimedia Public Identity (IMPU) is used by any user for requesting communications to other users (e.g. this might be included on a business card). There can be multiple IMPU per IMPI. The IMPU can also be shared with another phone, so that both can be reached with the same identity (for example, a single phone-number for an entire family).

A wildcarded Public User Identity expresses a set of IMPU grouped together.

SIP Application servers (AS) host and execute services, and interface with the S-CSCF using Session Initiation Protocol (SIP). An example of an application server that is being developed in 3GPP is the Voice call continuity Function (VCC Server). Depending on the actual service, the AS can operate in SIP proxy mode, SIP UA (user agent) mode or SIP B2BUA mode. An AS can be located in the home network or in an external third-party network. If located in the home network, it can query the HSS with the Diameter Sh or Si interfaces (for a SIP-AS).

Public Service Identities (PSI) are identities that identify services, which are hosted by Application Servers. As user identities, PSI shall take the form of either a SIP or Tel URI. PSIs are stored in the HSS either as a distinct PSI or as a wildcarded PSI:

A Breakout Gateway Control Function (BGCF) is a SIP proxy which processes requests for routing from an S-CSCF when the S-CSCF has determined that the session cannot be routed using DNS or ENUM/DNS. It includes routing functionality based on telephone numbers.

Media Resources are those components that operate on the media plane and are under the control of IMS Core functions. Specifically, Media Server (MS) and Media gateway (MGW)

There are two types of Next Generation Networking interconnection:

Offline charging is applied to users who pay for their services periodically (e.g., at the end of the month). Online charging, also known as credit-based charging, is used for prepaid services, or real-time credit control of postpaid services. Both may be applied to the same session.

Charging function addresses are addresses distributed to each IMS entities and provide a common location for each entity to send charging information. Charging Data Function (CDF) addresses are used for offline billing and Online Charging Function (OCF) for online billing.

One of the most important features of IMS, that of allowing for a SIP application to be dynamically and differentially (based on the user's profile) triggered, is implemented as a filter-and-redirect signalling mechanism in the S-CSCF.

The S-CSCF might apply filter criteria to determine the need to forward SIP requests to AS. It is important to note that services for the originating party will be applied in the originating network, while the services for the terminating party will be applied in the terminating network, all in the respective S-CSCFs.

Initial Filter Criteria (iFC) are filter criteria that are stored in the HSS as part of the IMS Subscription Profile and are downloaded to the S-CSCF upon user registration (for registered users) or on processing demand (for services, acting as unregistered users). They represent a provisioned subscription of a user to an application. iFC are valid throughout the registration lifetime or until the User Profile is changed. The term Shared iFC denotes an iFC which, due to its common use for a large number of subscribers, is only referenced in the Subscription Profile and provisioned on a different path between the HSS and the S-CSCF.

The iFC may be composed of:

It is envisaged that security defined in TS 33.203 may not be available for a while especially because of the lack of USIM/ISIM interfaces and prevalence of devices that support IPv4. For this situation, to provide some protection against the most significant threats, 3GPP defines some security mechanisms, which are informally known as "early IMS security," in TR33.978. This mechanism relies on the authentication performed during the network attachment procedures, which binds between the user's profile and its IP address. This mechanism is also weak because the signaling is not protected on the User–network interface.

CableLabs in PacketCable#PacketCable_2.0, which adopted also the IMS architecture but has no USIM/ISIM capabilities in their terminals, published deltas to the 3GPP specifications where the Digest-MD5 is a valid authentication option. Later on, also TISPAN did a similar effort given their Fixed Networks scopes, yet the procedures are different. To compensate for the lack of IPsec capabilities, TLS has been added as an option for securing the Gm interface. Later 3GPP Releases have included the Digest-MD5 method, towards a Common-IMS platform, yet in its own and again different approach. Although all 3 variants of Digest-MD5 authentication have the same functionality and are the same from the IMS terminal's perspective, the implementations on the Cx interface between the S-CSCF and the HSS are different.