Among his chief concerns is the ‘scene of production’ as a way of presenting art and highlighting facture (the process of ‘making’ rather than for example, mimesis or representation of anything but the work itself). The work is site specific installation, having a relation to its setting in contrast to prevailing ideas of a work of art standing alone.

Buren graduated from the Ecole Nationale Supérieure des Métiers d'Art, Paris, in 1960.[1] He began painting in the early 1960s. However, by 1965 – a year he spent in the Grapetree Bay Hotel on the Caribbean island of Saint Croix[2] – he had abandoned traditional painting for the vertical stripes (8.7 cm wide, alternating between white and a color), which have become his signature. Working on site, he strives to contextualise his artistic practice using the stripe - a popular French fabric motif - a means of visually relating art to its situation, a form of language in space rather than a space in itself. Denoting the trademark stripes as a visual instrument or ‘seeing tool’ he invites us to take up his critical standpoint challenging traditional ideas about art.

He began producing unsolicited public art works using striped awning canvas common in France: he started by setting up hundreds of striped posters, so-called affichages sauvages, around Paris and later in more than 100 metro station stations, drawing public attention through these unauthorised bandit style acts. In another controversial gesture he blocked the entrance of the gallery with stripes at his first solo exhibition. Expanding on this idea, in 1971 he created a 66 foot banner, Peinture-Sculpture, to divide the Soloman R. Guggenheim Museum’s rotunda in New York. For his first New York solo show, in 1973, Buren suspended striped squares of canvas on a cable that ran from one end of the John Weber Gallery to the other, out the window to a building on the other side of West Broadway and back.[3] In 1977 Buren cut up one of his artworks from 1969 and made a new work, designating that the sections should hang in the corners of a wall, whether that wall was empty, had doors or windows, or even had other artworks hanging on it.[4] Since the 1950s he has amassed some 400,000 of what he calls photos-souvenirs, documenting his work and travels around the globe. 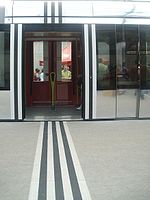 As a conceptual artist, he was regarded as visually and spatially audacious, objecting to traditional ways of presenting art through the museum/gallery system while at the same time growing in hot demand to show via the system. In the late 1960s Buren hit on the mark that connected him with ideas of space and presentation arising through deconstructionist philosophies backgrounding the May 1968 student demonstrations in France. Between 1966 and 1967, he joined forces with fellow artists Olivier Mosset, Michel Parmentier, and Niele Toroni to form the group BMPT, whose intention was to reduce paintings to the most elemental physical and visual elements through the systematic repetition of motifs.

From 1960 on, Buren designed a number of permanent site-specific installations in the United States, Belgium, France, and Germany. In 1986 he created a 3,000 m² sculpture in the great courtyard of the Palais Royal, in Paris: Les Deux Plateaux, more commonly referred to as the "Colonnes de Buren" ("Buren's Columns"). This provoked an intense debate over the integration of contemporary art and historic buildings. In 1993, Buren was nonetheless commissioned to design the work in situ Poser/Déposer/Exposer for the Café Richelieu at the Louvre in collaboration with Jean-Pierre Raynaud.

Since the 1990s, Buren’s work has become more architectural. He creates new spaces within existing environments such as beaches (Le Vent soufle où il veut, 2009), city centers (A Colored Square in the Sky, 2007), public parks (La Cabane Éclatée aux 4 Salles, 2005) and entire museums (The Eye of the Storm, 2005).[5] In 2004, for the occasion of the opening of the French cultural year in China, Buren exhibited in his in situ installation De l'azur au Temple du Ciel (From the sky to Temple of Heaven) at Temple of Heaven in Beijing.[6] A Rainbow in the Sky (2009) consists of thousands of colorful pennant flags hovering over a busy pedestrian square in Pasadena.[7]

Buren collaborated with Hermès on a number of occasions. The artist inaugurated Hermès' contemporary art gallery La Verrière in Brussels in 2000 by transforming its walls with bold graphics, colours and his trademark stripes, and later opened the Atelier Hermès in Dosan Park, Seoul with his Filtres colorés, coloured panels that diffused the light to dramatic effect.[8] In 2010, he created "Photo souvenirs au carrè", a 365 limited-edition line of scarves decorated with silk-printed photographs.[9]

In 2009 Buren collaborated with the collective "ensemble(s) la ligne" created by RCP Design Global agency, with, among others, Louis Dandrel, Roger Tallon: Curseur (2009-2013). It is a work in situ - for Tours Tram - three black and white stripes vertically, which will join the same horizontal marking on the ground, both at right angles to the opening of the doors. Trainsets shaped cursor with "mirror effect" identified in black and white stripes.[10] · [11]

Buren had his first important solo exhibition at the Galleria Apollinaire in Milan in 1968, where he blocked a glass door, the only entrance to the gallery, with a striped support. He has since installed his environmental installations worldwide. By the ’70s and ’80s he was exhibiting in Europe, America and Japan. Buren wished to take part in Harald Szeemann's exhibition "When Attitudes Become Form", in Bern in 1969, without being invited. Two of the contributing artists offered him space, but instead Buren set about covering billboards in the city with his stripes. He was arrested and had to hightail it out of Switzerland.[12] In 1971, Buren devised a banner, 20 by 10 metres, with white and blue stripes on both sides to be hung at the Guggenheim Museum in New York in a big international group show, conceived to encourage artists to exploit the building's space. Other artists, including Dan Flavin and Donald Judd, protested that the banner blocked views across the rotunda, compromising their works. Buren, in turn, said Flavin's fluorescent lights colored his banner. The night before the opening the banner was removed.[13] Buren was later invited to participate in the Documentas 5-7 (1972-1982).

In 1986 when François Mitterrand was President, he attained leading artist status after he created Les Deux Plateaux (1985–86), a work in situ for the Cour d'Honneur at the Palais Royal in Paris, Paris (see details above). That same year, he represented France at the Venice Biennale and won the Golden Lion Award. Buren had major solo exhibitions at the Touko Museum of Contemporary Art, Tokyo, in 1989, at the Centre Georges Pompidou in Paris in 2002,[14] at the Guggenheim Museum in New York in 2005, at Modern Art Oxford in 2006, and at the Kunsthalle Baden-Baden in 2011. In December 2006 Buren won the competition to make Arcos Rojos / Arku Gorriaka, a new major project for the iconic 'Puente de La Salve' bridge next to the Guggenheim Museum in Bilbao while, in February 2007, the Musée Fabre in Montpellier re-opened with a new permanent commission. For the 52nd Venice Biennale Buren created a new site-specific work for the Giardini of the Italian Pavilion, and was curator of Sophie Calle's contribution to the French Pavilion.[15] In 2009, Buren conveived Couleurs superposes (Layered colours), a performance which he directed at the Metz Métropole Opera House and Theatre on the occasion of the opening of the Centre Pompidou-Metz.[16] In 2011, he decided to cancel an exhibition at the Ullens Center for Contemporary Art in Beijing in "solidarity" with detained artist Ai Weiwei.[17]

In 1990, New Zealand honored him as a Living Treasure for their 150th anniversary and in 1991 he received the International Award for the Best Artist given in Stuttgart, Germany, followed by the Grand Prix National de Peinture in France, 1992.[18] In 2007 Buren was awarded the Praemium Imperiale. He was one of the five artists shortlisted for the Angel of the South project in January 2008.

Daniel Buren is represented in London by Lisson Gallery and in New York by Bortolami, http://www.bortolamigallery.com/Buren/burenartistpage.htm