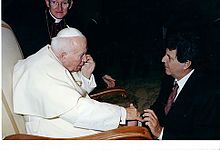 Oswaldo Payá Sardiñas (born February 29, 1952 in Havana, Cuba) is a political activist in Cuba and is considered that country's most prominent political dissident. He received the Sakharov Prize in 2002. In 2005, he was nominated for the Nobel Peace Prize by former Czech President Václav Havel, with fellow Cuban dissidents Raul Rivero and Óscar Elías Biscet.[1]

Oswaldo Payá was brought up in a Catholic family and would have been six or seven years old when in 1959 the Cuban government began to suppress the activities of the Catholic Church. In his youth he chose not to join the Communist Party or its youth organizations, but at the age of 16 was drafted into the Cuban Army. During his service he was punished for refusing to participate in transporting a group of prisoners and was sentenced to penal labour on the Isle of Pines (today known as the Isle of Youth) for three years.[citation needed] A devout Christian, he has ascribed the incident which led to his punishment to a refusal to compromise his religious beliefs. Subsequently trained as an engineer, today he works making anaesthetic equipment. He is married with three children.

Oswaldo Payá became a founder member of the Christian Liberation Movement in 1988. Created by secular Catholics it is today a non-denominational political organisation seeking to further the civic and human rights of Cubans.

In 1992, Payá publicly announced for the first time his intention to run for representative to Cuba’s national legislative body, the National Assembly of Popular Power. Two days before the deadline to register his candidacy at the Assembly of Postulation, he was detained by police at his home and taken to a “Committee for the Defense of the Revolution” center, where he was awaited by officers of the Cuban Communist Party (CCP). The CCP conducted a closed session of the Assembly that lasted only a few minutes and included CCP supporters only. [1]

In 1997, Payá and other members of the Christian Liberation Movement collected hundreds of signatures in support of their candidacy to the National Assembly. It was the first time that citizens had presented themselves as candidates with popular support and without the government’s backing; however, the electoral commission did not accept their candidacies.[2]

In 1998, together with other members of the Christian Liberation Movement Payá founded the Varela Project and remains its most prominent member. The Varela Project collected more than 10,000 signatures from Cubans on the island to present an appeal to the government for legislative changes via a national referendum. Cuba’s constitution empowers citizens to put to a national referendum any proposal that receives at least 10,000 signatures from registered Cuban citizens. These changes, had they been accepted by the government and approved by popular vote, would have introduced in Cuba freedom of association, freedom of expression, freedom of press, free elections, the right to operate private businesses, and amnesty for the political prisoners. In 2002, Payá presented in person over 11,000 signatures supporting the Varela Project to the National Assembly, and in 2004 he presented 14,000 additional signatures. However, the National Assembly has ignored this constitutional request.

National Dialogue and Program for All Cubans

In 2003, Payá and other leaders commenced a National Dialogue process in which over 12,000 Cubans on and off the island discussed their visions for Cuba’s future in over 3,000 discussion groups, using a "working document" as a baseline for discussion. Their comments and suggestions were systematically compiled and incorporated into the Program for All Cubans, which Payá publicly presented in 2006 as a path to a peaceful and democratic transition. Learn more about the National Dialogue here. Read the Program for All Cubans here.

Unlike some Cuban dissidents he does not accept aid from U.S. government sources and opposes the current U.S. Cuban embargo stating in 2000 that "Lifting the embargo won't solve the problems of the Cuban people. Maintaining it, is no solution, either".[3] Paya has asked specifically for the unconditional lifting of all trade sanctions on food and medicines and for the US to engage in a process with Cuba with the aim to end all trade sanctions.[3][4] He also maintains a distance from political Cuban groups in the U.S. with a refusal to support their stated aim of implementing land reacquisition upon the return of exiles to Cuba:

"It is not a neoliberal programme. For this, we are under attack by the powerful groups in Miami. When people say what is going to happen in Cuba after Fidel, we say - hold on, there are 11 million people in Cuba, not only Fidel Castro."[5]

Although his political activity is tolerated and in a few instances he has been allowed to travel abroad, Payá reports that both he and his family are subject to routine intimidation. Today there are approximately 300 political prisoners in Cuba, including members of the Christian Liberation Movement and supporters of the Varela Project:

"I have been told that I am going to be killed before the regime is over but I am not going to run away."[5]

Oswaldo Payá has been accused by some exiles of sympathizing with the underlying ideology of the socialist system in Cuba, because of his support for many of the social measures that were put in place by the revolutionary government.

His "Program for all Cubans" has also been criticized for excluding Cuba exiles from the first elections while allowing members of the Cuban Communist Party the right to vote. [2] (See Transitory Provisions Relating to Chapter 2, Second)